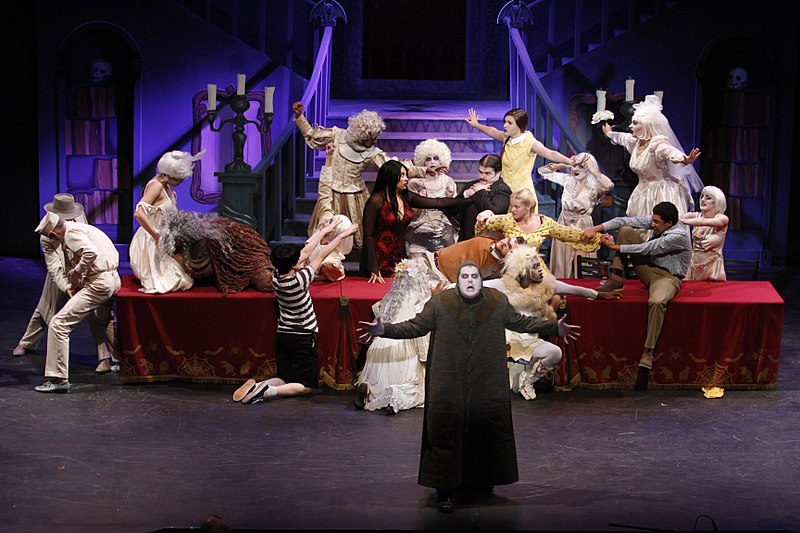 The BPHS Music Department will stage “The Addams Family” for its spring musical March 15-18, 2023.  The show is directed by Mr. Todd Kuczawa and Ms. Julia Davin, the Pit Director is Mr. Jay McDowell, and the Choreographer is Ms. Paige Landay.

To summarize, the show tells the story of Wednesday Addams and how she falls in love with Lucas Beineke, a boy from an ordinary family, and how the two families react to the news. When the families learn that they will get married, it ends up creating conflicts between the characters. The news tests how well Morticia can trust her husband, Gomez. As Wednesday is preoccupied with Lucas, her brother, Pugsley, deals with the fact that she won’t be able to torture him anymore. Additionally, Alice unleashes her true feelings about her marriage to Mal. Throughout the entire story, there is comedic relief with Grandma, Fester, and Lurch.

Now, to introduce the characters and the students portraying these roles.

Morticia Addams is the wife of Gomez Addams and the mother of Wednesday and Pugsley Addams. She is the real “head” of the Addams family as she is a witty, strong willed woman. It is very important to her that her husband, Gomez, keeps no secrets from her.  “She believes everything should be her way or no way, and it’s really interesting watching her have to deal with some conflict in the...

Gomez Addams is the husband of Morticia Addams and the father of Wednesday and Pugsley Addams. He takes great pride in his family and what it means to be an Addams. He attempts to keep everyone in his family content and happy. His wife, Morticia, and daughter, Wednesday, are both valuable to him which ends up starting conflict when Wednesday requests he keep a secret from Morticia. Gomez will be...

Wednesday Addams is the daughter of Morticia and Gomez Addams and the sister of Puglsey Addams, who she has a love-hate relationship with. She is the love interest of Lucas Benieke. Wednesday is a dark, sarcastic character who is not afraid to make her voice heard. She shares her father’s big heart and her mother’s wit.  She will be played by senior Elizabeth Robinson and junior Meghan DeHaven....

Lucas Benieke is the son of Mal and Alice Benieke and the love interest of Wednesday Addams. He is considered “normal” to the Addams family and this is why everyone disapproves of the relationship between him and Wednesday. “He likes to think everything through, but by the end of the show he shows a darker side that you don’t see at any other point prior in the show,” Justin Muench sai...

Alice Benieke is the wife of Mal Benieke and the mother of Lucas Benieke. She is a sweet, stereotypical housewife character who is devoted to her family over anything. While at the Addams family dinner party, she accidentally drinks a potion that causes her to completely change and reveal her “full disclosure.” She will be played by seniors Nora Bell and Maggie McGrath. “I am so excited ...

Mal Benieke is the husband of Alice Benieke and the father of Lucas Benieke. As an adult, he is stubborn and serious, but he once was carefree and was a follower of The Grateful Dead, but then lost that side of himself. “At first he is not accepting of the Addams family and of his own family, but as the musical progresses, he learns to loosen up and accept those around him,” said Cayden Lod...

Fester is the child-like, enthusiastic brother of Gomez Addams and the uncle of Wednesday and Pugsley Addams. In the musical, Fester is the comic relief who believes in love, and that influences how he acts as the narrator of the story. He will be played by seniors Anthony Hughes and Dylan Finnell. Hughes has been in two other musicals at BPHS. He played Big Jule in "Guys and Dolls" his freshman year...

Grandma is the wise, quirky, and funny mother of Gomez Addams. She is 102 years old and is a comic relief in the show. She looks out for everyone in the family, especially Pugsley. She will be played by junior Lacie Scheidler and sophomore Carly Dowell. Scheidler has been in one other musical at BPHS. She was a Featured Dancer in "Cinderella" in her sophomore year. She also has perform...

Pugsley Addams is the son of Morticia and Gomez Addams and the brother of Wednesday Addams. Pugsley is a little who deep down just wants to be tortured by Wednesday. He fears that they will no longer get to share this interesting form of bonding now that Lucas, Wednesday’s boyfriend, is around.  “He’s funny and still has a sense of childlike wonder and innocence about him,” AJ Huber said....

Lurch is the extremely tall butler of The Addams Family. He only speaks in moans and groans and moves slowly. He will be played by senior Keegan Brusoski and junior Nathan Tietz.  Tietz said: “I really like this show. It is very funny and enjoyable to watch. I’m very excited to play Lurch because of the funny character he is.” Previously, Tietz has not performed in a BPHS show, but he ...