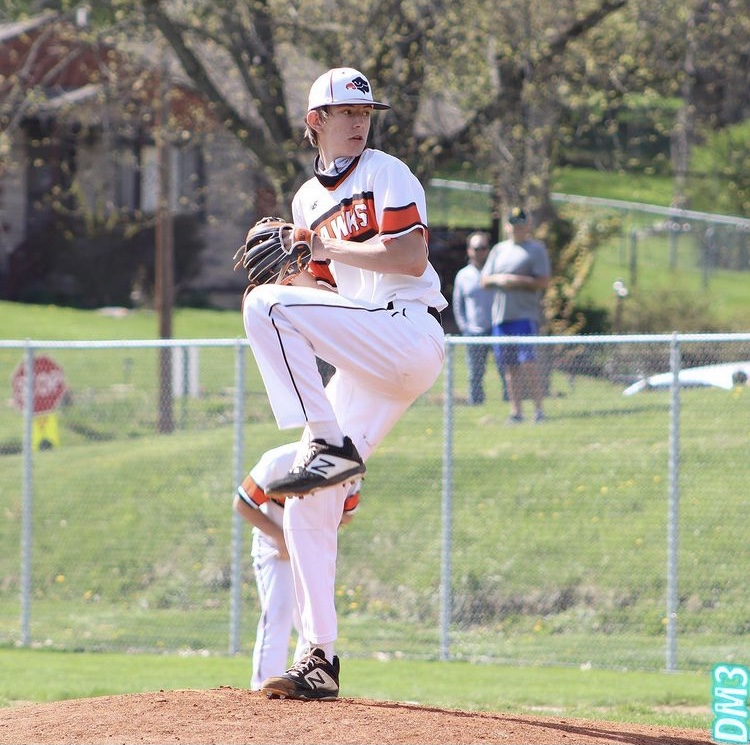 Evan Holewinski pitches against Trinity on April 20. The Hawks won 4-0.

How long have you been playing?: “I first picked up a bat when I was 2 but actually started playing when I was 6.”

Do you think this team has what it takes to win a WPIAL Championship?: “Absolutely, our starters have one of the lowest ERA’s in the WPIAL if not the best, and our lineup is generating a lot of runs.”

What’s the biggest obstacle you face as a player?: “It was always a struggle to put on weight.”

Baseball in college?: For sure.

Evan Holewinski is a sophomore at BPHS and participates in Varsity Baseball for the Hawks. During the fall, you can catch him in the classroom, and in the spring, you can see him on the mound, pitching.

On Saturday, May 1, Holewinski threw a complete game shutout against Connellsville. He was the TribLIVE HSSN player of the game.

Evan is a very charismatic teen who loves to be around people. You can see him walking around school with a big smile. He is a tall and lanky right-handed pitcher for the Hawks, and he also plays first base. During the summer he plays for the Pittsburgh Stars, his AAU team.

Holewinski is the youngest of two from parents Gretchen and Tim. He has an older sister Emily Miller. On the baseball field he wears No. 14 because it’s the closest number to his favorite professional player, Dustin Pedroia, who wears No. 15.

Bo Conrad, one of Evan’s teammates, said, “So much love for ‘Holey’, great player, and even better guy right there.”

So far this season, Evan is 4-0 through 23 innings pitched. He has a perfect 0.00 ERA, 25 strikeouts, 0 walks, and only allowing 11 base hits. He aspires to be selected to the WPIAL’s Second-Team All-Conference.

Senior Star pitcher Eric Chalus, Jr. had this to say about Evan: “Quite kid on and off the field, but a great pitcher. As soon as he steps on the field, especially the mound, he’s a fierce competitor. Always wants to win.”

Evan’s favorite part about playing for the Hawks is, “The atmosphere we create for every game regardless of the meaning of it, but when it’s a big game, there isn’t anything better.”

The young right-handed pitcher has a very bright future, as he is a future Division I prospect.