Super Bowl LIV Prediction: Chiefs too much for Niners

The Chiefs Offense vs 49ers Defense 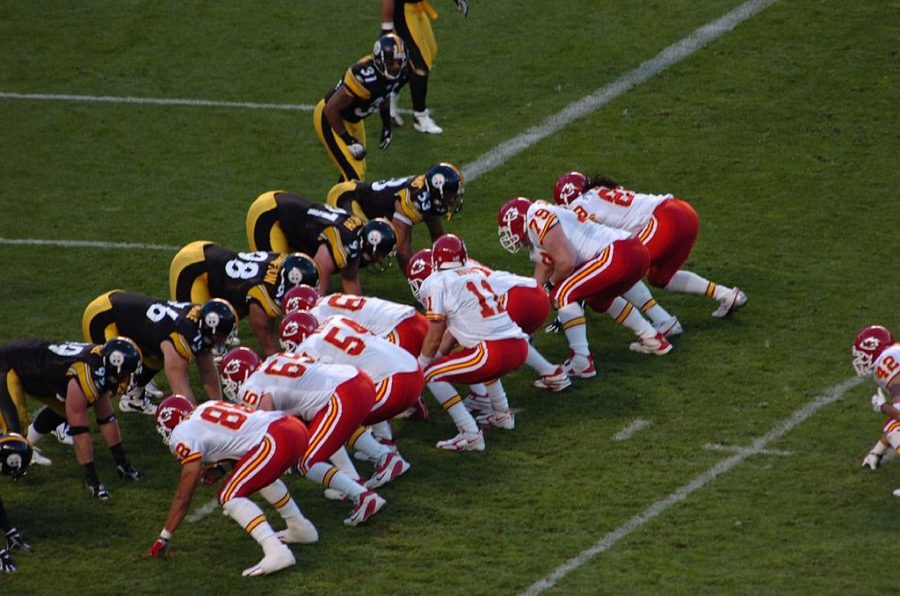 The Kansas City Chiefs lineup on offense for a play against the Pittsburgh Steelers defense on October 15, 2006. The Steelers own the game 45-7.

Well, here we are NFL fans.  It’s that time once again where the league is down to two teams to compete for the Vince Lombardi Trophy.  This year, for the first time in three years, the Patriots are finally not in the Super Bowl as everyone would expect.  They lost to the Titans in the Wild Card round.

The cities that are celebrating right now are San Francisco and Kansas City, which both teams are heading to Miami.

First off, let’s start with how the Kansas City Chiefs clinched a spot in Super Bowl LIV.  To start, they had some luck to get a first-round-bye due to the Dolphins beating the Patriots in Week 17, along with the Chiefs beating the Chargers.

After that, they had to face a tough Houston Texans team who beat the Bills in the Wild Card in overtime.  They also defeated the Chiefs at Arrowhead earlier in the season.  The Chiefs had a rough start, being down 24-0 before the first quarter even ended.  However, the team would dramatically turn around in the second quarter.  They would score four straight TD’s to lead 28-24 at halftime!  They would hang on to a 51-31 win.

The next week was their toughest test, as they had to face the white-hot Titans who beat the Patriots, and upset the heavy super bowl favorite Ravens in a blowout.  The Titans also beat the Chiefs, 35-32 in the regular season.  Another rough start would commence at the Titans would control the ball for most of the first quarter, leading 17-7.  But just like the last game, the Chiefs would come back to take a 21-17 lead at halftime.  The Chiefs would score two big TDs in the second half, including a 70-yard-TD from quarterback Patrick Mahomes to wide receiver Sammy Watkins to clinch the AFC Championship for the Chiefs for the first time since 1969.

Now, let’s head out west to the 49ers.  Let’s just say it was a bit of an easier road for them.  In the divisional round, they had a tough start being down 7-0 to the No. 6 seed Vikings.  However, quarterback Jimmy Garoppolo and the offense woke up, leading to a 27-10 win, also due to their defense.  The next week, they would face a tough Packers team.  But just like in the regular season, the game wasn’t even close.  They would lead 27-0 at halftime.  The Packers would try to fight back, cutting the deficit to 34-20, but it was too much to overcome.  The 49ers running back R. Mostert would run for 220 yards and four TDs!  This is the 49ers first Super Bowl since losing it to the Ravens in 2013.

Let’s get to the good part, my prediction.  Now, this one is tough, because both teams have some flaws.  For the Chiefs, their defense is suspect with slow linebackers and an average safety core.  For the 49ers, there’s a little bit less, but Jimmy Garoppolo really isn’t a game-changing QB, and they lack a breakout wide receiver.  So where does all of this lead me?  Well, to me, the Chiefs have the advantage in this game.  Why?  It’s two words: Patrick Mahomes.  He is a generational quarterback that no one has ever seen.  In his first season, he threw for 50 TD’s!  And this year, while his numbers declined, he has a better experience of the game.  From his sidearm to extending the plays, there’s never been an NFL QB like him.

Just look at these awareness plays from Mahomes.  That shows how elite this man is.

Now, it helps that he has some weapons alongside him with the fastest player Tyreek Hill, Sammy Watkins, and tight end Travis Kelce.  Their running game is solid too with Dammian Williams.  Their defense questions me, but they did shut down Titans running back Derrick Henry for only 79 yards, after rushing for over 100 in the first 2 playoff games.

The reason I don’t have the Niners winning is that Jimmy Garoppolo is not a game-changer.  He is a game managing QB, and he does it well.  But in order for them to win, they need to score points, lots of them.  Yes, they scored 37 on the Packers, but that team was a fluke.  Their defense has been questionable all year long and the 13-3 record for the Packers was a fluke.

At the end of the day, I believe Mahomes can lead a game-winning drive much more than Garoppolo can.  He never wowed me throughout the season.  It was more of their defense that surprised me.

However, this explosive Chiefs offense is too much for the Niners to handle with all the weapons.