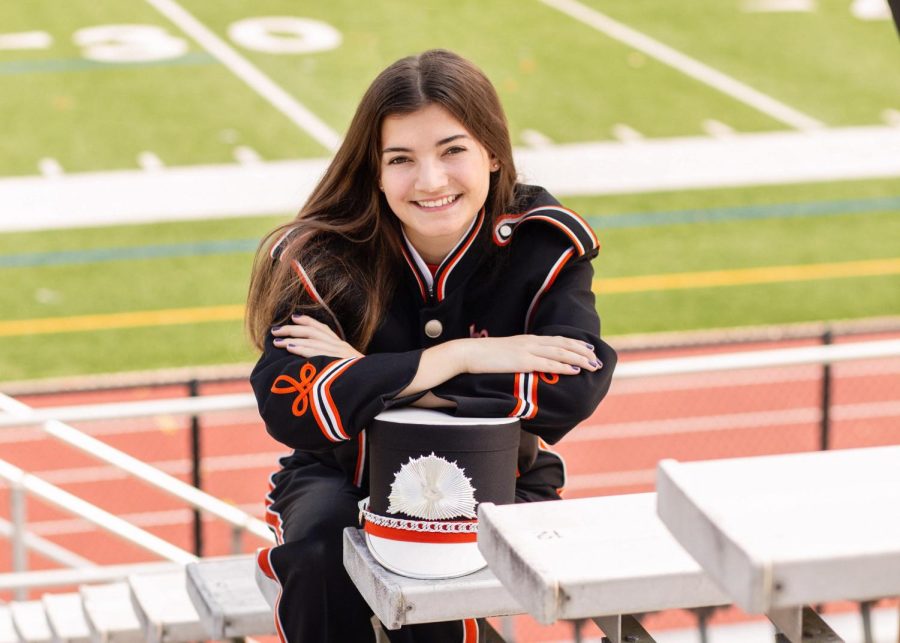 Senior Victoria Hoffman shows an immense amount of school spirit and leadership with all the activities she participates in.

One of the many activities is her involvement in the Bethel Park Music Department. Victoria has played the alto saxophone for eight years.

She played alto 2 her sophomore year and lead alto her junior and senior years.

She joined the BPHS Black Hawk Marching Band as a freshman. As a sophomore, she became a squad leader and maintained this position through her junior year. This year, as a senior, she was selected to hold the position of student director.

“As student director, I acted as a liaison between the directors and the students,” said Hoffman.

Hoffman had the opportunity to conduct the marching band in playing BPHS’s Alma Mater. Hoffman said that conducting this was her favorite memory of high school.

She also brought her talent of playing the saxophone into playing in the pit orchestra for the musical.

Hoffman said, “I am very fortunate to have played in the pit orchestra for all four of my high school shows.”

She played alto saxophone in “Annie Get Your Gun,” “Guys and Dolls,” and “25th Annual Putnam County Spelling Bee.” For “Cinderella,” there was no alto saxophone part, so she transposed a bassoon part to a baritone saxophone.

Hoffman has also been a member of the chorus all four years of her high school career.

Hoffman has two siblings, Garrett and Molly, both of which were, according to Hoffman, “heavily involved in the BP music department with marching band, almost all of the ensembles, musical, and PMEA events.”

“To say they inspire me is an understatement. They have been such amazing mentors and my best friends over the years,” Hoffman said.

Hoffman also shows her leadership skills in other activities around the school.

She joined SGA her freshman year as a homeroom representative. She was elected as a senator and held the position of media coordinator her sophomore year. In her junior year, Hoffman was selected for SGA E-board. As a senior, she was elected president of SGA.

Hoffman has also taken part in TLC (Teen Leadership Corps) since her sophomore year. As a member of TLC, high school students mentor incoming freshmen. At the GOLD and BOLD events, they teach them about the upcoming four years of their life. Hoffman was one of these incoming freshmen once as she participated in GOLD her 8th-grade year. In her junior and senior years, she captained her TLC team at the GOLD event.

Another activity Hoffman has involved herself in is girl scouts. She has been a girl scout since kindergarten. She is currently a second-year ambassador girl scout.

Hoffman said: “Being a girl scout gave me so many unique experiences and helped me find a career path. I am so fortunate to have been a part of scouts for 13 years.”

She is also a member of NHS, Homecoming Committee, and Ways n’ Means.

When asked what her favorite activity was out of all the activities she does, she said: “Most notably, I favor anything I do in the BPHS music department. Each experience is so unique, and I love the variety of options it offers. There are so many different classes and activities to be a part of and I enjoy spending that time with my friends and bettering myself through the process. Everything I do through the music department is very fulfilling.”

Recently, Hoffman was recognized as the February Bethel Park Rotary Student of the Month. Both of her older siblings have also received this award.

Hoffman said: “In January, I was chosen to participate in the Bethel Park High School Great Alumni Hall of Fame Selection Committee, and I helped induct the 5 new individuals in our high school’s hall of fame.”

With all of her activities, Hoffman still maintains a 4.4 GPA.

Hoffman said: “I am also very fortunate to have taken AP Music Theory. This provided me with a larger understanding of the logistics behind the music I was making on a daily basis. Mr. Derby is an incredible teacher, and he made the most complicated matters simple to understand. I also loved Honors Philosophy. This is a junior/senior class and I am so happy I added this to my schedule. We learn a concept, read about it, reflect by watching a movie, and have large group discussions on philosophical topics.”

“After I get my bachelor’s, I will pursue a master’s shortly down the line. I hope to attain a real estate license too as I love everything and anything about homes… I hope that I am able to include some type of speech therapy or social work into my life down the line,” Hoffman said.

When asked about her dream job as a child, Hoffman said: “At one point I wanted to be a librarian, a farmer, a police officer, a doctor, a vet, an ice cream taster, a zookeeper, and everything in between. At a young age, I was exposed to a variety of careers. I was fascinated with every job, but I could never find myself devoting the rest of my life to it. The one consistent answer was always a teacher.”

Hoffman is inspired by Dolly Parton and Jill Biden.

“I adore Dolly Parton and her selflessness. Recently, I have also been inspired by Jill Biden, and her dedication to continuing teaching her students while in the White House is very influential to me as a future teacher,” said Hoffman.

“My favorite band is the Monkees, but I also love anything from Elton John, Billy Joel, and the 60s-90s. Some of my all-time favorite songs are “Goodbye Stranger” by Supertramp, “We Built This City” by Starship, or “Heart of Glass” by Blondie,” Hoffman said when asked about her taste in music.

If Hoffman had to choose a favorite season, she would choose winter. She loves everything associated with the season, especially the snow.

Hoffman said, “I like Pittsburgh because it has all of the seasons, and each one offers something different.”

“Everything from the acting to the music to the cinematography to the plot is beautiful. I will never not be obsessed with it and I cannot say enough about how stunning it is,” Hoffman said when asked why “La La Land” was her favorite movie.

Hoffman is truly an outstanding student and leader. This student spotlight was well deserved in that she needs to be more recognized for how much work she contributes to everything she does.