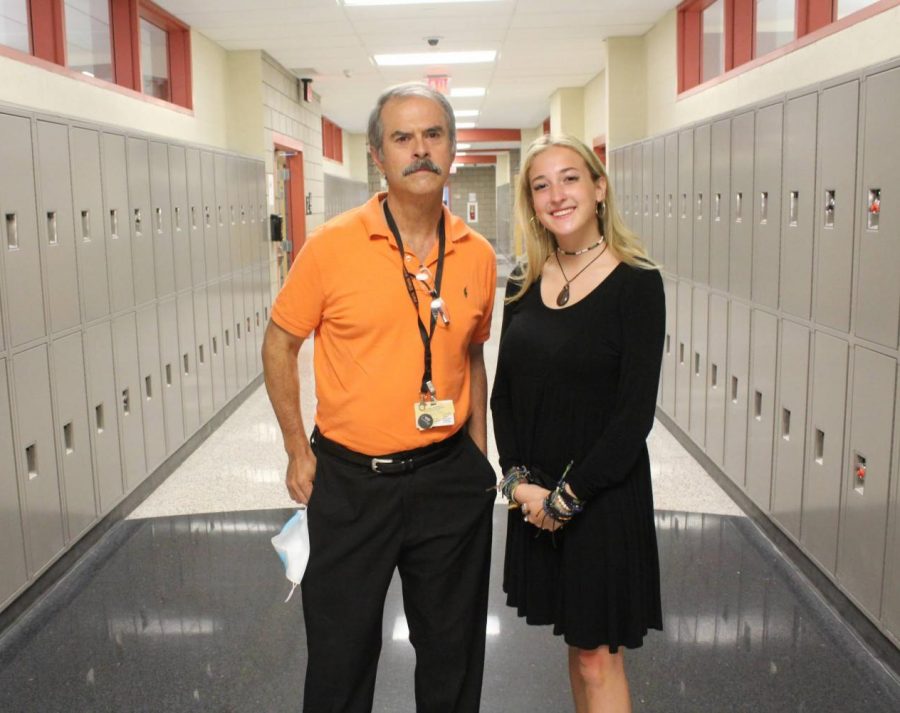 Mel Fiel (with Brooke Veith) is this month's Staff Spotlight.

If you have ever seen a Tesla zooming up Black Hawk Drive, just know it’s Mel Fiel. Mel (which students refer to him by) has been a staff member at BPHS for 12 years. He grew up in Virginia, heard about the position here, and decided to take on the challenge. Mel’s main duties include managing the phone systems and making sure the network runs smoothly for all students and staff. Mel finds great pleasure in his job due to the puzzling aspects.

When Mel gets home from working hard here at the school, he appreciates watching tennis. Tennis is something very special to him. He began playing tennis at the age of 12 and played for four years on the high school tennis team at Western Branch High School. He also played on the tennis team that went to a national amateur tournament.  He played throughout college and even was the coach of the tennis team.

Mel moved to Roanoke, Va. where he met his wife of over 35 years (stopped counting after 35) and had two wonderful children. He went to college at Old Dominion University. He then moved to Richmond, Va. where he worked for the Richmond Redevelopment and Housing Authority. At RRHA, Mel became involved in network communications. Then an opportunity came up to work at Reynolds Metals, a Fortune 500 company. A company called Alcoa bought Reynolds and moved him up to Pittsburgh. The company outsourced his position, so he began to look for new employment. He found an ad for a network position at Bethel Park School District, and that is where Mel’s work here all began.

Mel would love nothing more than to visit Yosemite. The dramatic scenery including the gigantic granite domes, cliffs, rivers, creeks, and high waterfalls is an experience that words cannot begin to describe, and Mel wants to see it all.

You might catch Mel relaxing with a slice of pizza. His order includes cheese with pepperonis from anywhere but specifically peppers and olives.

Mel’s biggest accomplishment is helping the school out. When asked if he could have three wishes, he said, “All three wishes would be world peace.”

For how hard Mel works in this school, it might be a surprise to students and staff that he was diagnosed with Parkinson’s disease in 2014. Parkinson’s is a disorder in the central nervous system that affects movement, and often includes tremors. Some struggles that Mel faces with this disease would include only being able to type with one hand and having trouble walking.

Mel is a laid-back man with a heart of kindness. He truly cares about our school and wants the best for everyone. Advice he would give is just to enjoy life and get involved. He worked so hard his whole life and not only is a great addition to BPHS but in this world. Just know if you see a man wearing orange every Friday, it’s Mel.