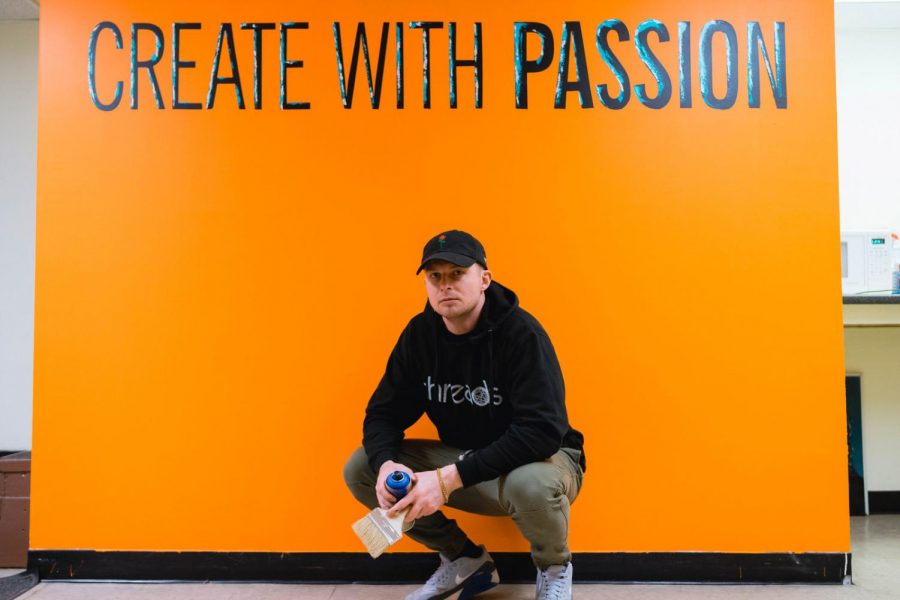 Dave O’Brien is a local artist who has made quite a name for himself in recent years.

O’Brien attended school in Bethel Park until eighth grade, and then transferred to and graduated from Seton-La Salle in 2011.

He fell in love with art in the first grade because of his teacher Mr. Wallisch, who now teaches at BPHS as an art teacher. Interestingly, O’Brien only took one art class during his senior year of high school and one art elective during college.

After graduating from Waynesburg University in 2015 with a degree in middle level math and history education, he taught in the city for a few years and then decided to move away from that route and instead stick with his business and art.

O’Brien is very content where he is right now, but he would consider returning to teaching after his student loans get paid off.

When you see his art, it’s hard to believe he just started his painting career a couple years ago!

In fact, his interest started when his grandmother suggested for him to make Christmas gifts instead of buying them.

“My grandmother used to paint portraits with oils years ago, but stopped due to the paint fumes affecting her breathing, although she held onto the supplies. When I graduated from college, I couldn’t afford buying my family and friends Christmas presents, so my grandmother suggested I create something for everyone using her leftover oil paints. I never picked up a paint brush before, but I quickly taught myself how to paint through trial and error. When my family received their presents, they were shocked I could paint and encouraged me to create more,” said O’Brien.

After that experience, O’Brien has continued his passion for art and keeps on stunning the world with what he can do.

O’Brien likes to work on untypical canvases to give his work more exposure. For example, he recently painted a car that was showcased in Pittsburgh called “Alfa Romeo Art Car.” He also has created some work on the walls in New York.

O’Brien got inspired by experimenting with everything which includes colors and textures to people and places. He has watched documentaries and visited museums to expand his knowledge and creativity.

When asked what inspired him, O’Brien responded with some of his favorite artists: “I began to appreciate other artists’ work. Keith Haring was my first inspiration because of the pop colors he used and how fast-paced he worked. Andy Warhol is a huge inspiration not because of his artwork, but rather his business mindset with producing art in high volume. Other inspirations are ‘Madsteez,’ Tripp Derrick Barnes, Casey Neistat and Sofles.”

O’Brien has seemed to find his passion and has grown very popular with it.

He grew up wanting to be a professional football quarterback, then he wanted to be a teacher.

“A lot of my childhood dreams have changed, but I will say that art is the most fulfilling I have ever pursued,” he explained.

O’Brien is open to more than just painting and has a goal to explore more. He says that painting “is just the first step in my art career, but eventually I will want to experiment with new mediums.”

O’Brien hasn’t limited himself to the Pittsburgh scene, but other cities such as New York as well. In fact, he painted large scale murals using spray paints and he is determined to create large sculptures and even larger scale murals using spray paints in the future. He wants his artwork to be sponsored by large corporations and anything big where the public eye can appreciate the art.

When asked what has contributed to his success, O’Brien replied: “100% of it is my mindset and self-value. I try to raise the bar and expectations of each piece I create and frequently change styles because it’s like being a comedian. No one wants to go to the shows of a comedian that tells the same jokes every time, so I try to switch up my styles for that reason.”

Social media has played a role in promoting his business. Instagram in particular is a great free marketing tool to utilize for not only art, but any business or organization to get your name out there.

Word spread about his artwork and he was approached by the Italian luxury car company, Alfa Romeo, and The Ron Lewis Automotive Group to be commissioned a live painting of an art car for the Pittsburgh Grand Prix’s showcase. Since then, all of his commissions have come from either Instagram or word of mouth which have him currently booked until the fall of 2018.

When asked what was more important to him, the subject of his painting or the way it is executed, he responded, “I used to be focused on the way the painting was executed with the techniques and quality of product I used, but as of a couple months ago, I have been focusing on the subject and style I want to create. The hardest part about being an artist is finding a balance between what people commission you to create vs. what the artist wants to express.”

The best part about any person’s artwork is when you can see a part of themselves in it. Music and Pop culture influences O’Brien’s art a lot. He likes to make the canvas he is working on “untraditional as possible with bright colors and patterns” because that is more interesting to him. “…but as far as my personality goes, that is for the viewer to tell.” when asked how his personality is reflected in his work.

O’Brien’s advice for any artist-to-be is, “My advice to any aspiring artist is to accept constructive criticism, create your own opportunities, and find a way through any obstacle life throws at you. You cannot wait your turn for an opportunity as an artist or any other profession, so why not make the most of it…. Good things happen when you put ideas into action.”

You can look at some more of his artwork on his Instagram page here and on his website at https://www.daveobrienart.com/gallery