Bethel Park Music Program: Talent that speaks for itself

What makes the largest student group at BPHS so popular and successful? 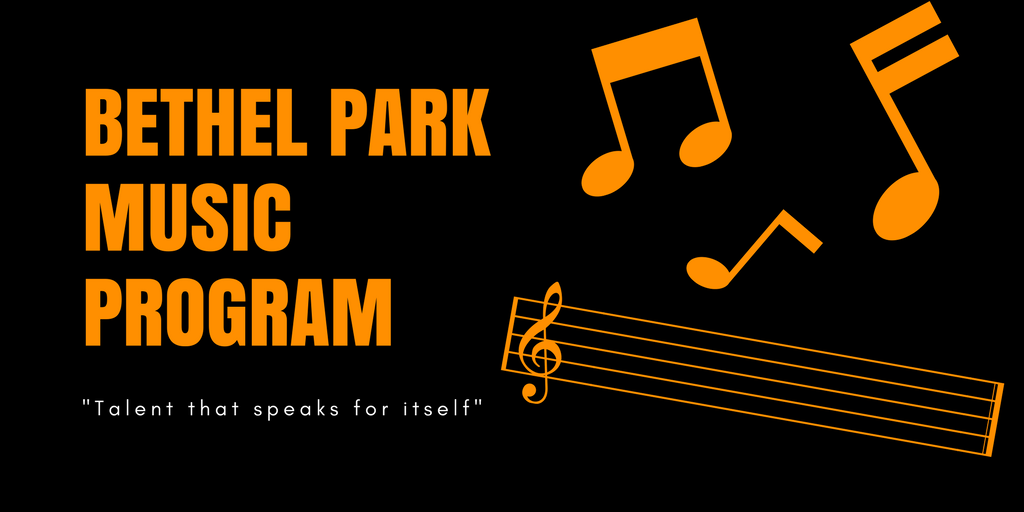 For the past 89 years, the BPHS Music Program has produced some of the most talented student musicians in the country. Consistently ranking at the highest levels in national competitions, the Bethel Park Music Program is unmatched in its commitment to rigorous education and excellence in performance.

This excellence in performance was continued this past year at the Disney Festivals of Music.

Earning Excellent Ratings were the Symphonic Band, Concert Band and Symphonic Orchestra, which also received a Best in Class Award.

Then sophomore Jenelle Wu received the Accompanist Award for her work with Top 21.

So what is the recipe for success making the BPHS Music Department achieve at such a high level?

The BPHS music teachers shared their thoughts on what sets BPHS ahead of the pack when it comes to music education.

When asked about the intensity of coursework between each of his classes, Mr. K described the differences saying: “Because we receive students from multiple schools coming into 9th grade, I start pretty basic to get everyone on the same page.  Then we move quickly in reading of rhythms, melody, and tone production.  Each year gets progressively more challenging, especially in the difficulty of the concert repertoire.  Top 21 performs repertoire that is often done at the collegiate level.​”

One of the best measures of success for the chorus program is the annual district chorus competition.

When asked about the how the chorus class was involved in District Chorus this year, Mr. K. said:  “We had 16 students chosen for District Chorus this year, the highest amount of any of the other schools. ​The singers prepared a pre-determined audition selection and sing it for a panel of three judges.  ​There are normally between 500-700 students who audition for District Chorus, and they only choose 160 singers, so the competition can be challenging.  The Bethel Park students tend to do well, and I would say we average about half of them being chosen.​ This year we had 16 in District Chorus, 15 qualified for Region Chorus, and six were chosen for All State Chorus.  ​I believe we had the highest amount of All State chorus students in Western PA.”

In addition to teaching the chorus classes, Mr. K is also the director of the annual BPHS Musical.

The spring musical has been a BPHS tradition for 50 years and has a track record for professional quality performances.

Unlike many schools, the Bethel Park musical is completely student performed. The cast, stage crew, and orchestra is completely comprised of students.

The stage crew also plays an immeasurably important role in the spring musical. The crew works several hours a day starting right after musical auditions to put together all technical aspects of the show. The students on stage crew take complete charge of all technical work, designing lights, sound, as well as scenery and props.

When asked about the musical, Mr. K said: “When you include cast, orchestra, stage crew, scenery painters, makeup artists, we involve over 200 students.  ​Of a 90 member cast in the musical last year, there were only maybe 4-5 students not in a music class.  ​We definitely have one of the largest casts on stage of any school in the area which can be very challenging to use everyone in a meaningful way.  ​We are very fortunate to have outstanding instrumentalists who are able to play the orchestra parts for the musical which were originally written for professional musicians.  Our stage crew is a very hard working group of students who build the scenery, hang and program the lights, and work the microphones.  Many schools hire professionals to do these tasks.”

Mr. K continued saying: “We definitely have an above average amount of students involved in music in Bethel Park. The music program​ has always been well supported by the school district and the community. Music has always been valued at a high level here. Previous directors were outstanding music educators and brought the program to where it is today. While times change, we are able to continue to provide an enriching music curriculum in addition to the academic and other artistic offerings at BPHS.”​

When asked if he believes Bethel Park performs at a level superior to other schools, Mr. K replied very modestly, saying: “I always tell my students they don’t need to speak about their talent; their talent will speak for itself. There are other school who have excellent groups. What makes us a little different is the cooperation and support between band, orchestra, and chorus. I think we are able to do some very good things here at Bethel Park, and I’m very proud to be part of our music program.”

The next teacher interviewed about the music program here at BPHS was the orchestra teacher, Mrs. Glover.

Mrs. Glover has been the orchestra teacher here at BPHS for eight years and teaches Freshman Orchestra, Concert Orchestra and Symphonic Orchestra. She also teaches up at IMS with the 7th and 8th grade Orchestra.

When asked how the intensity differs between each of the orchestra classes, Mrs. Glover said: “As the students grow and progress as musicians, there are always focusing on technique and musicianship, but I think the biggest difference between the three orchestras is musical maturity and experience. Only the Symphonic Orchestra competes at the annual Spring Music trip. The students in Symphonic Orchestra spend time learning the music individually and then we work very hard in class to prepare for competition in rehearsals.”

Much like the chorus class, a fantastic way to gauge the success of the orchestra here at BPHS is through the district orchestra competition. Students that participate in District Orchestra are selected through an application. If selected, the student receives the music to prepare usually about a month before the festival. On the first day of the festival, each student auditions for ranking, and only the top students will go on to the Regional level and then ultimately on to the State level.

When asked about the success and skill of the music program, Mrs. Glover said: “I believe Bethel Park has excellent involvement in the music program. Many schools have choirs, bands and orchestras, but not many have equal participation in all three strands. I think it is exceptional that Bethel Park has students involved in all three performing ensembles and also music electives here at the high school. I can’t say that we perform at a level superior to other schools, but I do believe we have much to offer students in the music department and all of the teachers require students to perform at their potential. We are very fortunate to have support from our administration and community to foster these excellent programs.”

When asked how the intensity between these classes differs, Mr. Derby said: “AP Music Theory is probably the most intense, as it is a collegiate level class and it is meant to prepare students to be prepared and excel at the college level. However, I am pretty intense with my expectations in all of my classes regardless of the level. I feel that intensity is important in order to push the students as far as they can go.”

When asked whether he believes BPHS musicians perform at a higher level than other schools, Mr. Derby said: “I believe that Bethel Park performs at a very high level, however superior to other schools is all relative. In order to truly compare, you would have to compare schools with the exact same socioeconomic background, and music schedules, which can be hard to do. In this area, we are in the upper level of programs, but if you were to compare us to programs in Texas, we would not look as good. What I think is important is that we continue to push ourselves to maintain a high level, and always strive to improve.”

Who knows what amazing things we can expect to see from the music program this year. With holiday and spring concerts to come, a whole season from the marching band, another spring competition trip, and this year’s musical, Legally Blonde, as well as countless other performances from the many different performance groups, great things are certainly in store for the 2017-2018 school year.

Check out this video produced by BPHS student Noah Gearhart about the 2016 Music Trip to Chicago!