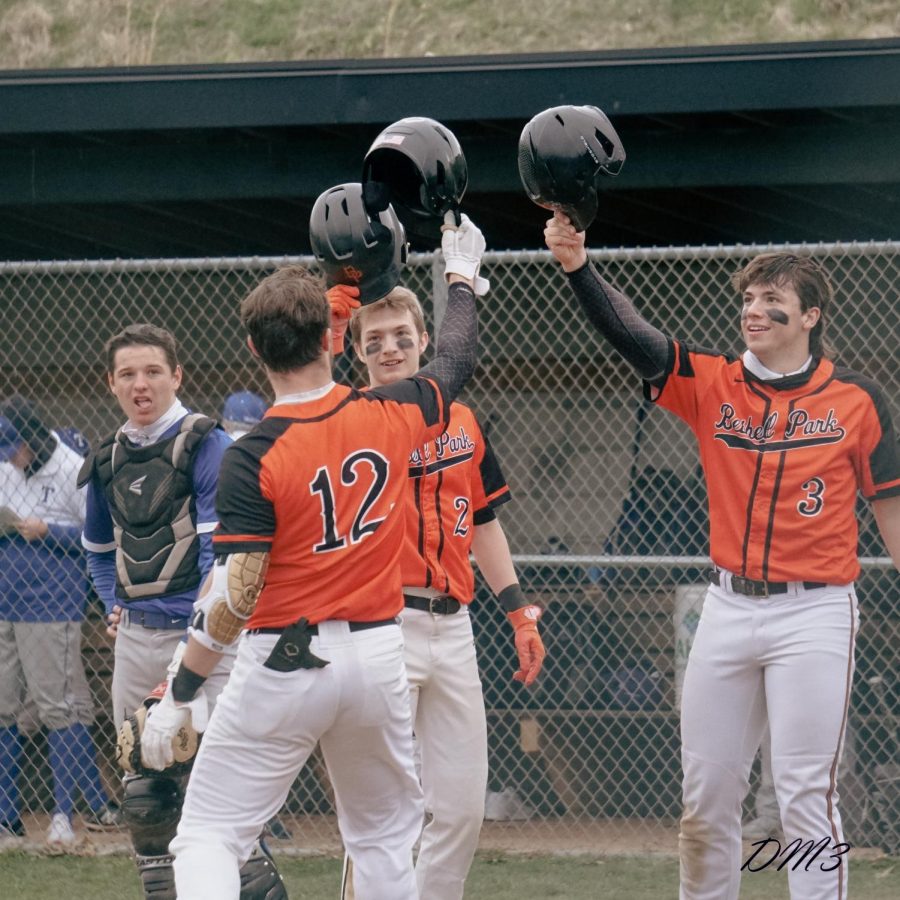 David Kessler, Jason Nuttridge, and Cody Geddes celebrate during their game against Trinity on Tuesday, April 5. The Hawks won the game 16-3 in five innings and improved their record to 4-0.

Many say to not play with fire, and that made its case at Bob Purkey Field Tuesday afternoon.

After a 7-0 win against Trinity on Monday, April 4, the Black Hawks proved that lightning can strike twice when they beat the Hillers again in a landslide 16-3 (5 innings) contest.

The Black Hawks started the game with junior Nathan Vargo on the rubber. Vargo was coming off a win against Mt. Lebanon in which he performed incredibly, pitching a scoreless win 10-0.

Vargo picked up where he left off, and after one recorded out, he allowed three runners on base. Vargo, doing Vargo things, found a way out of the jam, striking out two batters.

Bethel picked up the bats and went to work.

Right Fielder Jason Nuttridge started the affair with a single but later got called out at second on a fielder’s choice.

Ray Altmeyer opened the scoring for the Hawks, hitting in senior shortstop David Kessler on a second to first putout.

Following the first, we saw yet another great inning pitched by Nathan Vargo. Vargo found himself with a runner at third with one out but managed to get out of it following a ground ball and looking strikeout.

Junior John Chalus kicked off the bottom of the second with a gap shot into the outfield, reaching second base on a double. Chalus scored following first baseman/pitcher Evan Holewinski’s single, making it 2-0 Bethel Park.

Vargo’s rhythm was halted in the third inning of play, as after striking out one and walking one, Vargo let up the game’s first homerun to #29 Ty Banco of the Hillers. Vargo proceeded with the inning and got out of it ending his three inning game with two earned runs. The game was now tied 2-2.

The Black Hawks truly found their legs in what would be called a colossal third inning. This inning featured a runner scored by every starter of the Hawks. This is how it went down:

Freshman Ryan Walsh pitched a near-perfect inning, throwing eleven pitches and striking out all three batters he faced. Walsh has been near perfection all season, and many see a bright future in the freshman.

The Hawks tallied an additional three in the fourth inning, including a homerun off the bat of Ray Altmeyer, with junior Sebastian Schein closing the coffin on the Hillers after allowing one run.

The Hawks improved their hot start to 4-0 and will hit the road for two consecutive games versus rivals Baldwin on Friday and Albert Gallatin on Monday. They sit at No. 1 in Section 4 Class 5A.

Evan Holewinski is expected to get the starting job versus the Highlanders.