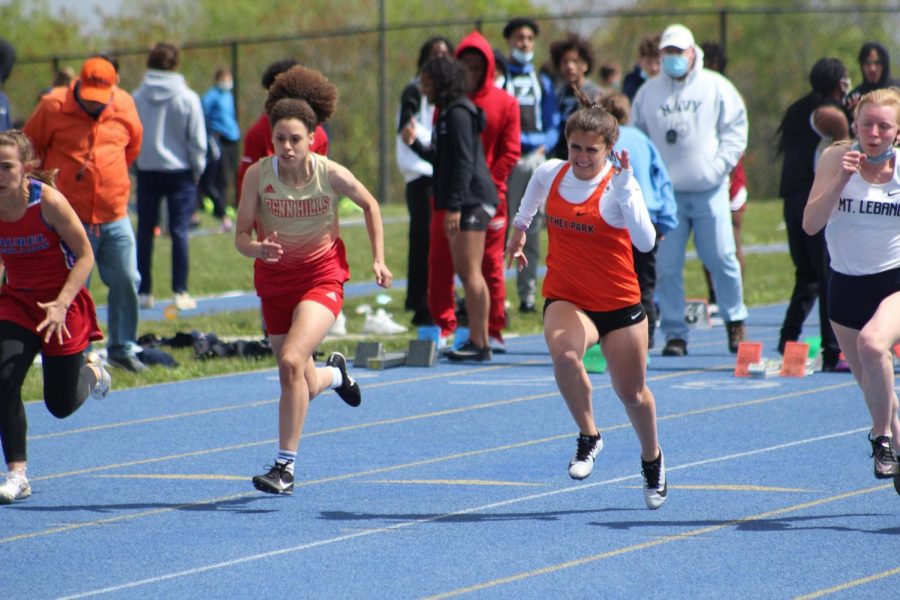 Freshman Artemis Conaboy finished fourth in the 100 meter dash at the Last Chance Meet on Tuesday, May 11 at West Mifflin.

It was a chilly, windy day on the hill at West Mifflin on Tuesday, May 11.

That didn’t stop the track and field athletes from blowing the competition away.

Shining for the Hawks were star pole vaulters Isaac Nirella and Megan Malecki. Both jumped to PR or personal record heights. Nirella soared above the rest of the field with a jump of a dizzying 13 feet 4 inches. Malecki wasn’t far behind with a jump of 12 feet 1 inch. She once again raised the bar (literally) for a new school record and a 13th best jump in WPIAL history! See below video of Malecki’s historic jump.

On the track, senior Michael Conroy placed second in the 110-meter high hurdles and first in the 300-meter intermediate hurdles. He ran a PR in the 300 hurdles.

Freshman phenom Artemis Conaboy placed fourth in the 100-meter dash and third in the 200-meter dash.

Other star freshman Jenna Lang won the 3200-meter run. She was joined by teammate and senior Anna Janaszek in the same race. Janaszek placed sixth.

In the field, Angel Feliciano placed sixth in the long jump while Kylie Taylor placed seventh.

Next up for the Hawks is the WPIAL Championships which take place Wednesday, May 19 at Slippery Rock University.

Qualifiers for the WPIAL Championships will be announced later this week, but after a stellar performance at the Last Chance Meet, it is looking very promising for the Hawks.