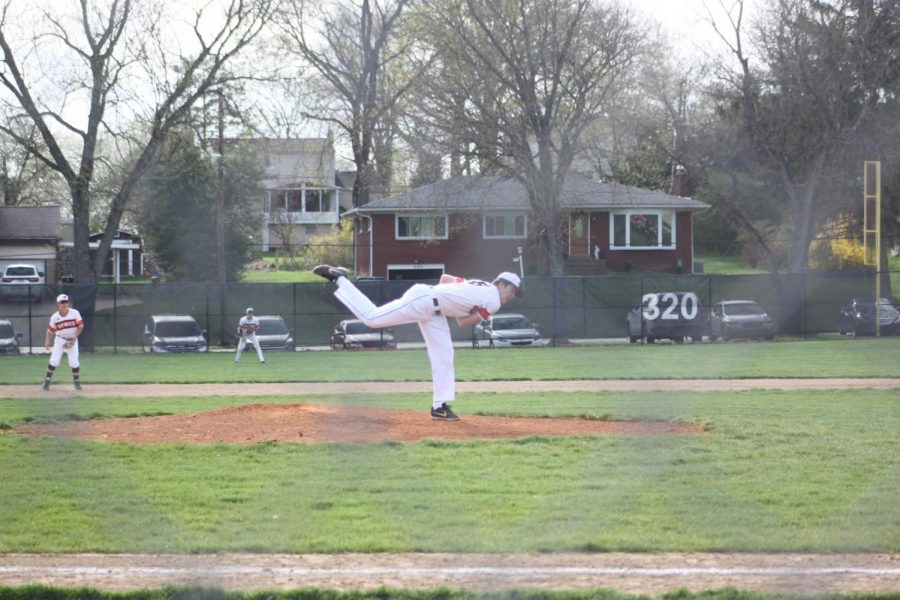 Dan Del Bene pitches in the Hawks' game vs. Baldwin on April 9.

It was a Monday afternoon when the Hawks traveled up to Seneca Valley to take on a talented and notorious Raiders baseball team. Before that day, it had been about two years since the last time Bethel Park and Seneca Valley battled it out on the diamond. They are a storied non-section rival, a team that the Hawks lost to 11-0 in their last regular season match up. However, the Hawks got well deserved revenge later that year in the playoffs, with a 3-2 win in 10 innings, snapping the “Boyce-Mayview” curse.

This time, in a back-and-forth contest, the Hawks held on in the end for the 6-4 win.

As the game started off on a sunny Monday afternoon, the Hawks jumped to an early lead. After a misplayed ball in right field, the Hawks were able to score two in the first frame. Later in the third inning, Larry Kusan had an RBI groundout to extend the lead to 3-1.

However, Seneca Valley was able to retake the lead in the fourth inning. A Seneca Valley Raider hit a three-run homerun to give them a one-run edge, 4-3.

Right after this, a pitching change was made to bring in senior Josh Peters. Cody Geddes went 4.2 IP prior, giving up 1 ER and giving the Hawks a chance to stay in the game. Peters was quickly able to retire the next batter with a routine flyball to right fielder Jason Nuttridge. Peters came back in for the 6th inning, retiring three out of the four batters he faced that inning, only giving up a lone two-out single.

This gave the Hawks a well-needed change in momentum, heading into the last inning with the bats in their hands. John Chalus led off the inning with an infield single to third base. With two outs in the inning, Cody Geddes got aboard with a hit-by-pitch, forcing the bases loaded with Eric Chalus up to bat.

The count got loaded up to 3-2 with Chalus battling at the plate. That’s when he ripped a fastball into the right-center gap to score all three runners, giving him 3 RBI and the Hawks a 6-4 lead. That was Eric’s third double in a row on the day. He went 3-3.

In the bottom of the frame, senior Danny Del Bene came in to replace Josh Peters to close the game out. Del Bene was able to work through some batters but let the bases get loaded. It got scary again for a second, but he was able to strikeout the last batter looking, securing the 6-4 win.

After the game, Josh Peters was awarded his first win on the season. It was his first regular-season win since 2019 against Mt. Lebanon, the game that clinched the section.

He had this to say about the win: “It was great to finally get a win on the mound again. It feels great knowing that I have one of the best defenses in the WPIAL. It helps our pitching staff pitch a lot more comfortable, if you know what I mean. Whenever our defense is playing well, the team morale as a whole is a lot higher.”

Last week, the Hawks clinched the section with a win over Thomas Jefferson. They have two more non-conference games this week to finish off the regular season. The Hawks travel to Chartiers Valley on Wednesday, and return home on Friday to face rival Mount Lebanon.