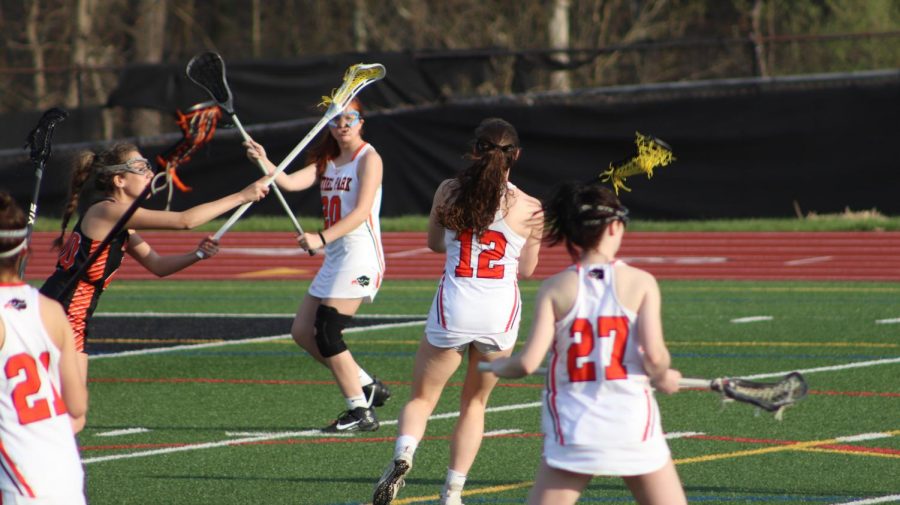 The Lady Hawks have managed to remain undefeated after a smashing victory against their toughest opponent of the season, the Upper St. Clair Panthers on Tuesday night at USC High School, improving their record to 9-0.

“I’m really proud of how far this team has come so far this season with the numbers that we have,” said junior captain Tori Krapp. “I had faith in us and we came out on top. We work really well together as a team, and I can’t wait to see where the rest of the season takes us.”

The score remained tight the whole game, but the team’s intensity throughout both halves led to their victory of 13-12, giving the Lady Hawks their seventh section victory of the season, taking them one step closer to becoming section champs.

“Tonight’s game showed that no matter how many numbers we have on the sidelines, it’s not going to stop us from being big on the field,” said senior goalie Kenna Moriarty. “I’m so proud of all the girls tonight for standing against the intensity and the hot weather and proving that we can always come out on top.”

“The game was one of the most exciting contests that I have watched my daughters play in,” said parent Molly Krapp. “I am so excited to see these girls continue to grow as a team and am looking forward to seeing them thrive as the season progresses.”

The lead scorer of the game was Caitlyn Schultz with five goals. Lucia Coccagno had four, Tori Krapp had two, and Meghan Krapp and Riley Miller both had one goal.

Meghan Krapp led the team with assists, racking in four, while Caitlyn Schultz and Riley Miller both had one.

Senior goalie Kenna Moriarty came out strong in the second half, saving thirteen out of the eighteen shots on goal.

“Tonight was intense, but we knew it would be,” said head coach Becky Luzier. “USC is a very solid team and we knew it would be a tough game and we would have to battle on every play if we wanted to come out on top. I’m really proud of the way our defense played during the tail end of the game and our goalie McKenna came up huge in the second half. We set a goal of wanting to be very dominant on the draw and I think tonight we showed we can achieve that against even the toughest competition on our schedule.”

“Wow. I think that word really sums up the night,” said senior captain Lucia Coccagno. “We pushed through the 80-degree heat with very few subs to beat a team (who was previously section champions) that we haven’t beat in many years. I’m so proud of all of our teamwork tonight and our success and can’t wait to see our run in the playoffs.”

The Lady Hawks are set to play their eighth section game on Wednesday, April 28 at 6 p.m. against Baldwin at home.