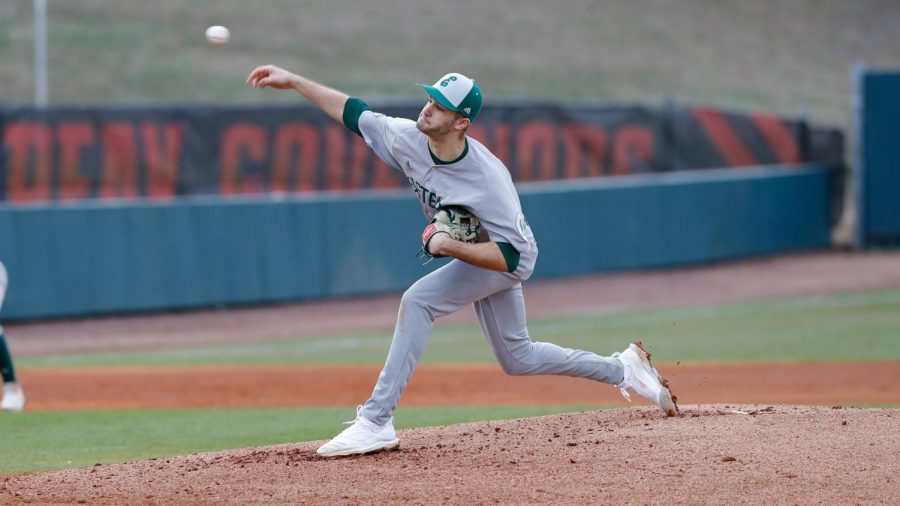 Justin Meis holds Mississippi State to its most consecutive scoreless innings this season.

For the Eagles, it was the hard-throwing junior Justin Meis who excelled. He tossed eight scoreless innings of baseball: This marked the longest Mississippi State has been held without scoring a run this season. Meis pitched 8.0 innings and faced 32 batters, which were both career highs. He also struck out four in his outing.

Going into the game, the Eastern Michigan Eagles were the huge underdogs. The Bethel Park native was tasked with taking down arguably the best lineup in collegiate baseball.

Coming out throwing bullets from the start, Meis sat Mississippi State down in order to end the first. He would repeat this in the third inning to keep the Bulldogs off the board.

“My mindset going into the game was just to be myself and do what I have been doing all season,” Meis said. “I always get a little bit nervous before every game, but anytime you can play in front of that many people, at a stadium like that, it definitely gets the nerves going a little bit more.”

Achieving a no-hitter in baseball is a rare and incredible feat, and Meis was on a mission to achieve that. He returned to the mound in the third inning and did not allow Mississippi State’s first hit of the game until there were two outs in the sixth.

After five innings, Meis officially had a no-hitter watch. Many wonder what was going through his head during his performance.

He said, “I was trying to just focus on one hitter at a time. The crowd was unbelievable. I was able to feed off their energy towards the end of the game.”

Conference play starts this season, and after a masterful pitching performance, all eyes are on star pitcher Justin Meis. With the long season ahead for the Eagles, one of Meis’s goals is, “to build off of each start and focus on getting better each day I take the mound. As a team, our goal is to take it one game at a time. Every Saturday, I want to give our team a chance to win the game.”