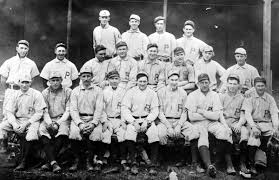 Since baseball season has yet to resume, there is not much recent news in the baseball world.

With that being said, you might as well go back and look at the past.

Though they have not won a World Series since 1979, the Pirates have one of the best all-time teams in the MLB.

Ranking them in order, here are my top 10 players in Pittsburgh Pirates franchise history:

As controversial as he and his history of steroids are, you can’t deny how good Barry Bonds was when he was on the Pirates. He had 984 hits in seven years with the Pirates while ending up with a 50.1 WAR as an outfielder.

One of, if not, the best third basemen in Pirates history is Pie Traynor. The Hall of Famer’s number is retired by the Pirates and he had a career .320 batting average.

Kiner is still considered one of the best players of the 20th century. He ranks only No. 9 on this list due to him only playing for eight years with the Bucs. He still had over 300 home runs and a 44.55 WAR.

Though it’s been a century since he played, Cooper is statistically one of the best Pirates pitchers of all-time. His career 2.74 ERA and 263 complete games put him among the game’s best.

Though he did not have amazing power, Vaughn was one of the best pure hitters in Pirates’ history. He had 1,709 hits in only 1,411 games and had an incredible 63.98 career WAR.

Pirates legend Dave Parker cracked the list at No. 5. Parker was a leader for the Pirates during their 1979 World Series run and 524 extra-base hits in 11 years.

You can make a case that he deserves No. 1, but that should not take anything away from Clemente. The “Great One” was known throughout baseball for his cannon of an arm and an amazing bat. He ended with 3,000 hits exactly and could have had more if it were not for his unfortunate death.

“The Flying Dutchman” is the best player in Pirates history. The incredible shortstop had 506 doubles and 210 triples in his career. He has one of the highest WARs of all-time at 113.81. His baseball card is worth millions.

As we wait for Pirates baseball to come back, it’s nice to look back and see some of the best who have ever put on a Pirates uniform.