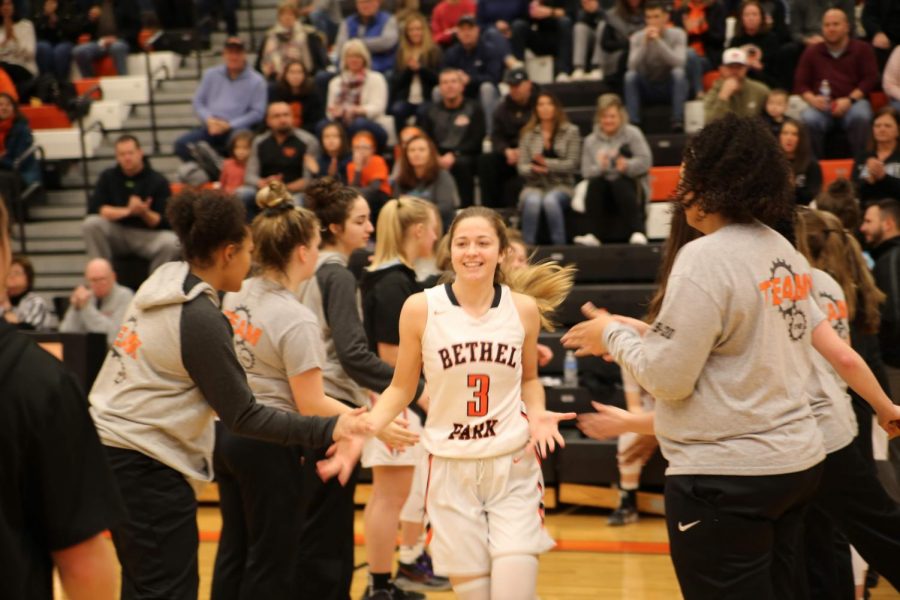 Lauren Mullen makes her way through the team tunnel before the Lady Hawks' game vs. USC on Jan. 20. Mullen was named an honorable mention on the Almanac girls basketball all-star list.

One of their many laurels included being section champions.  The Lady Hawks also finished their WPIAL season 21-3 with a runner-up finish to North Allegheny in the WPIAL championship.  They were also in the Elite 8 of the state playoffs that had been suspended due to health concerns with COVID-19.  Olivia Westphal and Maddie Dziezgowski reached their 1,000 point mark.  Head Coach Jonna Burke was in her 25th season of coaching.

To add to these many accolades, three starters have been named to the Almanac girls basketball all-star list.

Senior Maddie Dziezgowski was named to the first-team all-stars.  She averaged 15.6 points per game and 7.5 rebounds per game.  Dziezgowski will be continuing her basketball career at St. Bonaventure and plans to major in pharmacy.

Senior Lauren Mullen was named an honorable mention on the all-star list.  She came up big in the WPIAL championship.  North Allegheny’s Head Coach Stefko added, “That Mullen kid has as much guts as anybody in Western Pennsylvania.”  The starting point guard and team captain will be continuing her basketball career at Edinboro and plans to pursue a career in nursing.

Junior Olivia Westphal was also named to the first-team all-stars.  She averaged 15.4 points per game and 2.5 assists per game.  Westphal will be returning for the Lady Hawks next year as a fourth-year starter.

The Lady Hawks overcame Upper Dublin 47-40 on March 10, which was hopefully not their last game.

Olivia Westphal explains: “I’m really upset that I could have played my last game with my best friends, but hopefully I didn’t.”

The Lady Hawks were to play Plymouth-Whitemarsh on March 13 looking to advance to the next round of the playoffs.  They are all very optimistic that the PIAA will release the suspension and continue the playoffs.