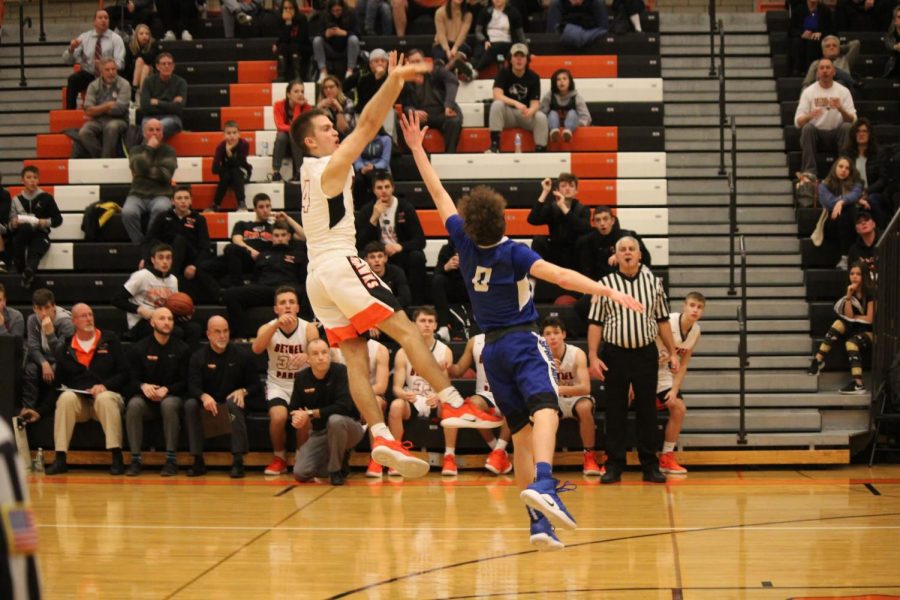 Ryan Meis shoots (and makes) a buzzer-beater against Hempfield on Dec. 19, 2018.

Ryan Meis has always shined on the basketball court and all of his hard work came to fruition Friday night when he eclipsed the 1,000 point milestone on a three-pointer late in the game. Meis finished with 33 on the night and left the Hagerty Family Events Center with 1,012 career points.

Meis, a senior who recently committed to Seton Hill, said it was never a goal of his to join the elite fraternity.

“I never really thought about it too much, but when I was told I was close, it was a pretty cool feeling to get it.”

Though the last 1,000-point scorer of BPHS is uncertain, Meis is believed to be first in recent years.

Notable teacher Mr. Allemang said, “1,000 points is obviously an incredible achievement, but I wouldn’t expect anything less from the host of ‘4 floors’ and ‘PTR Podcast,’ dare I say the greatest journalist to ever walk the halls of BPHS.”

While the humble Meis is excited about his honor, he is looking forward to starting section play this Friday.

“Friday night is going to be great. After the season we had last year, we are all eager to get out there in section play.”

The Hawks have a quick turnaround on Saturday when they face off against Gateway at 1:30 p.m at the Nest. The contest with the Gators is also the Great Alumni Hall of Fame game.