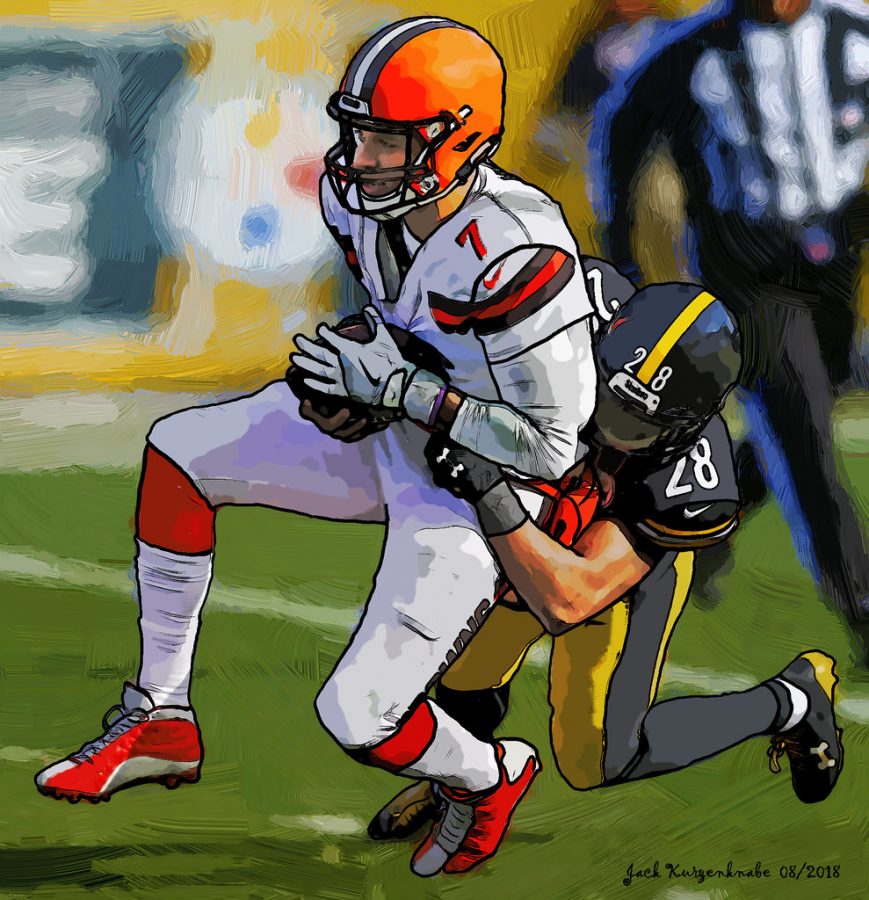 Two Sundays ago, the Browns and Steelers both won.  However, while the Browns blew out the Dolphins, the Steelers had a narrow 16-10 win over the Bengals.

At halftime, Mason Rudolph was taken out of the game due to his two interceptions in the first half.  Coach Mike Tomlin would go to the Duck himself, Devlin Hodges. On his first pass, he threw a deep TD to wide receiver James Washington to lead the Steelers to the win.

Fans were wondering heading into this past Sunday’s rematch with the Browns if another brawl would ensue.  Things already got ugly by Browns coach Freddie Kitchens wearing a “They Started It” shirt.  Luckily, there were no wild fights this time due to all the players involved in that brawl not playing.

After the Browns had a long 13-play-drive ending in a field goal, the Steelers would go three-and-out, including Hodges getting sacked on third-and-7.

The Browns would take advantage, and running back Kareem Hunt, in his third game this season due to his suspension earlier, would score a 15-yard passing TD from Baker Mayfield to give the Browns a 10-0 lead.

Fans started to boo and wonder if the Steelers could score.  Luckily, Hodges lead the Steelers to a drive that would result in a Boswell field goal.

After a Browns’ three-and-out, Hodges would throw it deep to Washington, and despite being interfered with by two Browns defenders, he still managed to hold on to the ball, tying the game up at the half.

After both offenses stalled in the first half of the third quarter, Hodges would lead a six-play drive, culminating with running back Benny Snell’s touchdown, which was his first-ever NFL TD.

On the next drive, as it looked like the Browns were driving, left end Bud Dupree forced a fumble out of Mayfield’s hands, and Cam Heyward picked it up for the Steelers.  That would lead to a field goal making it 20-10.

When it looked like the Browns were done, the Steelers offense couldn’t capitalize, including miscommunication between Hodges and Washington, leading to a Browns’ interception and a field goal cutting the deficit to 7.

On the next drive, Jaylen Samuels would keep getting first down after first down melting the clock all the way to less than two minutes left.

The Browns would eventually get the ball back, and Mayfield would benefit off a controversial roughing the passer penalty.  However, two plays later, Mayfield would overthrow receiver Jarvis Landry, and cornerback Joe Haden, ironically a former Brown, would close the game with a game-sealing interception.

This win was a big one for the Steelers, as they are the No. 6 seed in the AFC, while the Browns are out at the very moment.  The Browns need to win all of the rest of their games to even have a chance at the playoffs.  Meanwhile, the Steelers control their own destiny for the postseason.