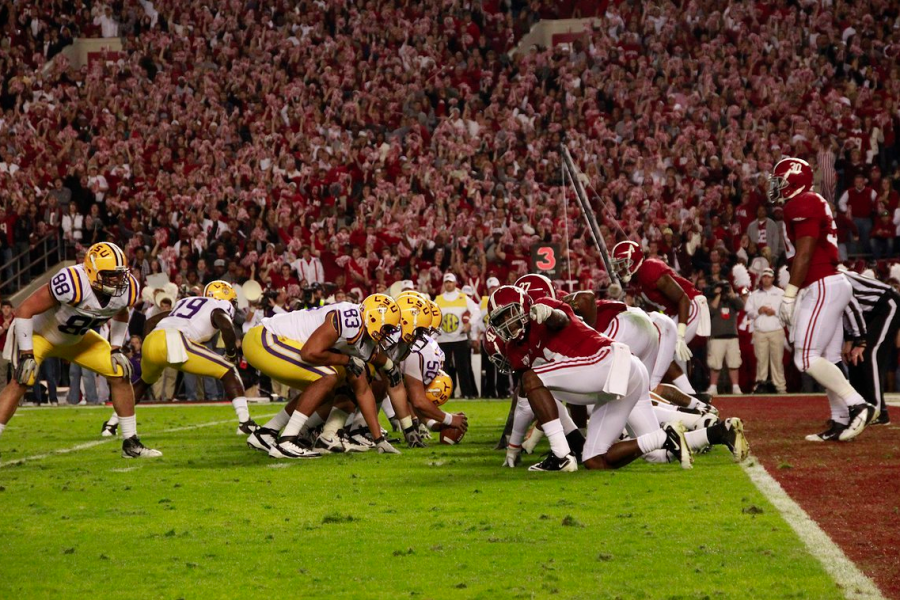 LSU looking to score a field goal in Bryant Denny Stadium vs Alabama on November 5th 2011.

Two of the top-ranked teams in the country met on Saturday, Nov. 9 in a huge SEC West showdown.

This was the premier matchup of the year that determined the SEC West and the college football playoffs.

Coming into the game, each team had a Heisman Trophy candidate QB in LSU’s Joe Burrow and Alabama’s Tua Tagovauloa.

The game started with a quick drive down the field from Alabama that ended with a fumble at the goal-line from Tua.

LSU capitalized on that turnover with a 33-yard touchdown pass to WR Ja’Marr Chase. Then on the next Bama possession, they fumbled the snap on the punt attempt, which set up LSU in good field position to put them up 10-0 early.

Shortly after, Alabama came right back with an 87-yard punt return for a touchdown from WR Jalen Waddle.

Both teams were going back and forth with scores until LSU intercepted Alabama and scored right before the end of the half to put the Tigers up big 33-13.

Bama knew that they were going to have to have a resurgence to get back in this game.

Bama’s defense forced a fumbled on the first drive of the half and later scored a 15-yard touchdown reception from RB Najee Haris.

It was now only a six-point game with a receiving touchdown from Najee Haris making the score 33-27.

LSU shut down the comeback with two touchdowns from LSU RB Clyde Edwards-Helaire to put the game on ice with a 12-point lead late in the fourth quarter.

Tua threw an 85-yard touchdown to WR DaVonta Smith, but they ran out of time. LSU came up with the 46-41 win.

This game looked like a Big 12 shootout with both teams scoring over 40 points for the first time in this historic rivalry.

Both QBs put up huge numbers highlighted by Tua Tagavailoa’s 418 passing yards and four touchdowns, but he couldn’t outscore the leading Heisman candidate Joe Burrow who threw for 393 yards and three touchdowns.

LSU RB Clyde Edwards-Helaire had a breakout game on the national stage with 103 rushing yards and three touchdowns including the game-clinching first down.

LSU WR duo Justin Jefferson and Je’ Marr Chase put up big numbers with a combined total of 13 receptions 219 yards and a touchdown.

From the Alabama offense, Najee Harris put up 146 rushing yards and a touchdown. Also, WR DeVonta Smith led the team with 213 yards and two touchdowns.

This was a huge win snapping Alabama’s eight-game win streak against LSU.

The Tigers look to continue their dominance as they are currently the top-ranked team in the nation.