A look back at seven weeks of college football 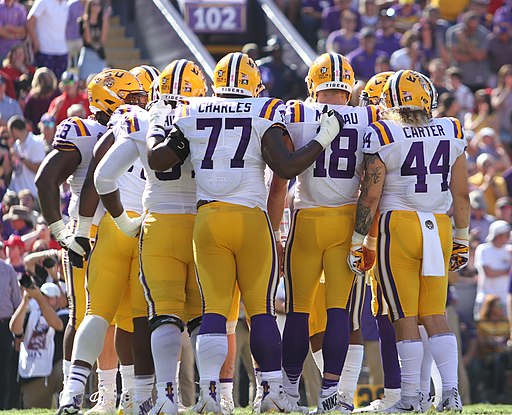 Through eight weeks of college football, a lot has happened. With the final stretch coming up, we look back at the first half of the season week-by-week.

Week 1: The start of the college football season provided many big out of conference games. First, it started with an opening game between Florida and Miami in the battle of Florida. A good game it was with the Gators coming back and eventually finishing on top. A week later, the Oregon Ducks and Auburn Tigers met in a PAC 12 SEC showdown. Oregon led most of the game, but a second-half comeback led the Tigers to victory.

Week 2: There were already two games in which playoff implications took place. First, a day game, the Texas A&M Aggies went to Death Valley to battle the defending champions Clemson Tigers. The game was a close one that Clemson came out on top of with a 14-point victory. Later that night, a battle for the ages took place with the LSU Tigers taking on the Texas Longhorns. It was a tight battle until LSU eventually took control and the victory.

Week 3: A rather quiet week Week 3 was. Big 10 powerhouse Michigan State was taken down by Arizona State in a lower scoring game of 10-9. The Keystone Rivalry also took place this week with Penn State barely edging Pitt in a game that came down to the wire.

Week 4: Week 4 had many big games. Michigan took on Wisconsin at noon and really wasn’t a contest as Wisconsin took control early and kept it. Texas A&M was back again against a tough Auburn team. A close game it was, but ultimately Auburn was victorious. Finally, prime time was the battle of the powerhouses. Georgia vs. Notre Dame was a thriller. A defensive battle for the most part, Notre Dame was strong, but Georgia was stronger and ended up holding on and edging Notre Dame.

Week 5: Not much happened in Week 5. Defending champions Clemson Tigers survived a tight battle in North Carolina. Virginia was outlasted by Notre Dame in a steamroll. A PAC 12 matchup between USC and Washington was a defensive battle for the most part, but Washington ended up pulling out a win.

Week 6: Week 6 started out with a low scoring, defensive battle between Michigan and Iowa where Michigan ended up victorious in a 10-3 win. Later that day, Auburn Tigers took on the Florida Gators in what was a great game. Florida ended up pulling out a win in a very big game. That night the Ohio State Buckeyes took on the Michigan State Spartans in a blowout. Michigan St. was in it for the first half, but Ohio State showed their dominance in the second.

Week 7: This was a big week for the college football season. First, the Red River Rivalry took place as Oklahoma took on Texas. It was a close game in the first half as both defenses looked good. The second half, however, was mainly controlled by Oklahoma as they took in a win in which the score was closer than it should have been. Fast forward to that night, the LSU Tigers met the Florida Gators in the biggest game of the year so far. A back and forth contest it was. The Gators ended up making a mistake that cost them the game, an interception in the endzone. LSU ended up victorious in this one.