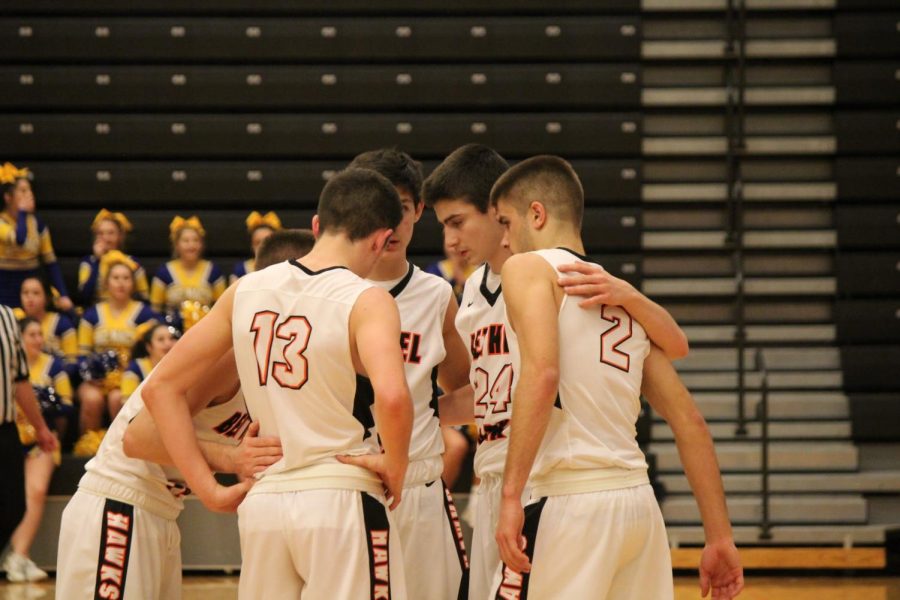 Hawks huddle up in the final moments of their game against the Big Macs on Tuesday, Jan. 30.

After the first quarter, it looked like the Hawks were going to take a big bite out of the Big Macs, but by the end of Tuesday night’s game, they were left hungry.

Down by 15 heading into the 4th quarter, the Big Macs went on a run and prevailed as time expired. The final score was 58-57.

At the end of the 1st quarter, the Hawks were up 13-4. At halftime, they had more than doubled Canon Mac’s points.

By the end of the 3rd quarter, the Big Macs closed the gap some but were still down by 15.

With about 4 minutes left in the game, the Hawks had some bad turnovers which caused the Big Macs to come back.

With little time left, senior guard Justin Meis gout fouled and was given two shots but couldn’t convert at the line.

The Hawks then fouled quickly and sent a Canon Mac player to the line with 5.2 seconds left, and he missed.

Ryan Meis got the rebound and took it down the court with seconds left, put up a floater and missed.

The high scorers were junior guard Alex Mullen with 20 and sophomore guard Tommy DiRienzo with 10.

With the loss, the Hawks are now 6-4 in their section and firmly stand in 3rd place.

They have two section games left:  one game at Connellsville on Tuesday, Feb. 6 and the other against Baldwin at The Nest on Friday, Feb. 9.