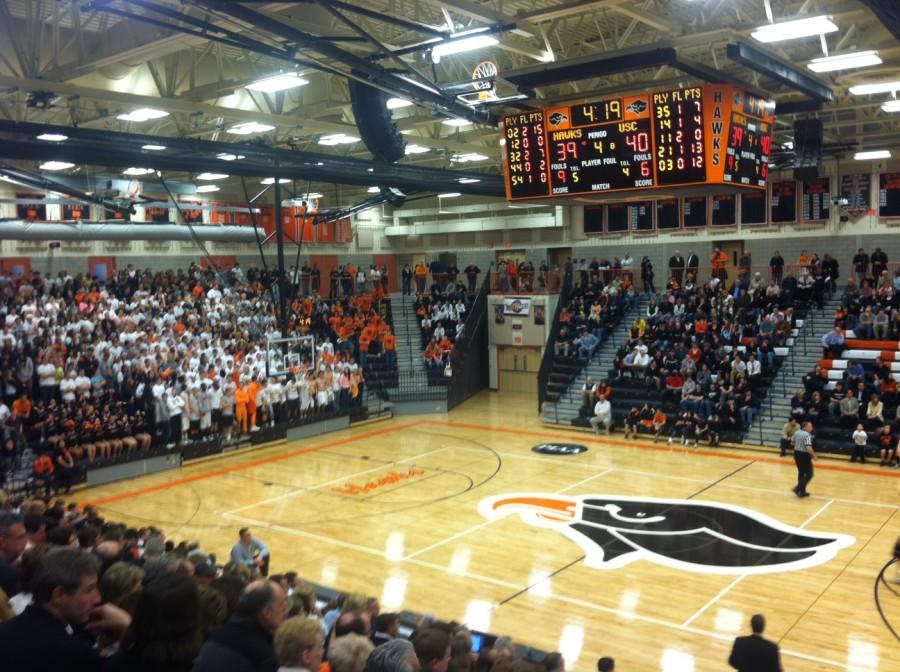 It was an astounding atmosphere on Tuesday night in the new BPHS gym. The 2,450 seat gym was packed to its maximum capacity. The majority of the fans being students of Bethel Park High School.

In a game now known as the Border Bash, the Black Hawks faced off against their bitter rivals Upper Saint Clair. They were also traveling with a student section, but not nearly as impressive as Bethel’s.

Shots, made and missed, were exchanged back and forth and the Hawks came out to an early lead. As the buzzer sounded at the end of the first half, Saint Clair was leading by one point.

The third quarter was an extremely even affair. Brian Holland led the way throughout most of the game draining three’s.

There was no separation between the two until close to the end of the fourth quarter. USC was pulling away until Bethel starting making some key stops. Trey Coyne aided the effort with some clutch shots from the elbow to bring Bethel within three points.

That was when Cody Gilchrist had a chance at a three point play after being fouled and making the shot. Even from the stands you could feel the immense weight on his shoulders. Following a close miss on the free throw, Bethel went back on defense. USC drove into the paint where, a Bethel big man made an excellent block. But the referee saw it as a foul. Worthy from USC made one of the two free throws. Bethel rebounded and went coast to coast and Gilchrist was fouled again. This time there was even more pressure. You could not hear a thing over the Upper Saint Clair students, but Cody made both shots sending the game to overtime.

Evan Schweitzer then took the game into his own hands and scored 6 consecutive points.

This along with some great defense guaranteed a Bethel Park victory in the new gym.

To top the icing on the cake, every one of the students in the exuberant student section stormed the court to show their excitement about the win.

Want more pics of the Border Bash in the new BPHS gymnasium? Visit the Almanac here.