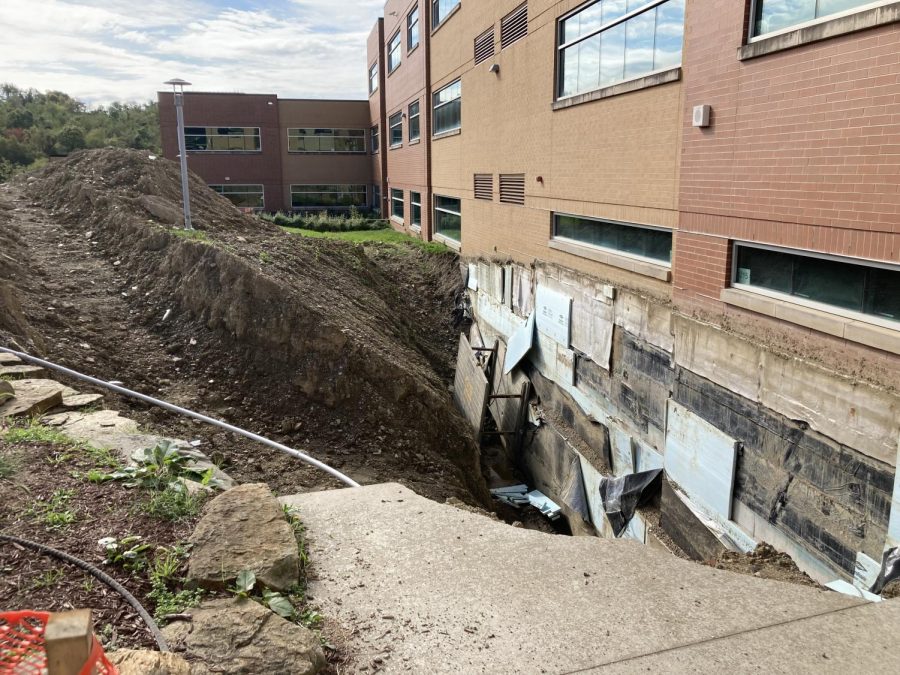 The exposed foundation of the school. Excavation revealed that the foundation drain has a blockage, and a waterproofing joint between separate pours of concrete has failed.

If you have been to BPHS recently, you may have noticed that the courtyard is all dug up.

The building has been experiencing severe moisture issues for many years now. The excavation in the courtyard was performed in order to find out where the leak was coming from that was sending water into some of the lower-level classrooms.

According to the district, the reason why this was happening is that the foundation drain has a blockage, and the waterproofing joint between separate pours of concrete at a complex intersection of foundation walls failed.

The foundation drain was video-scoped and cleaned along the entire length of the classroom section of the courtyard across from the athletic section.

Some of the things that will be done are all the exposed waterproofing, including at the joints will be replaced with a completely new waterproofing system that overlays the waterproofing layer. The exposed part of the drainpipe will have a new, perforated schedule 40 pipe.

Construction work will also be done in the art rooms because when the current flooring was installed, the moisture in the slab made it so the adhesive did not work, and so it began to fail. The moisture could be a result of the activities in the art room, and also moving heavy equipment a lot could have ruined the floor tiles.

Some things that will be done with the floor include replacing the current flooring with an epoxy floor system, this floor system will have no seams which will prevent water from seeping down under the slab. This type of flooring also bonds better with the concrete.  The floor replacement will cost $19,250.

When all these repairs will be made and how long it will take to make them remains to be seen. In the interim, the courtyard will continue to be closed.