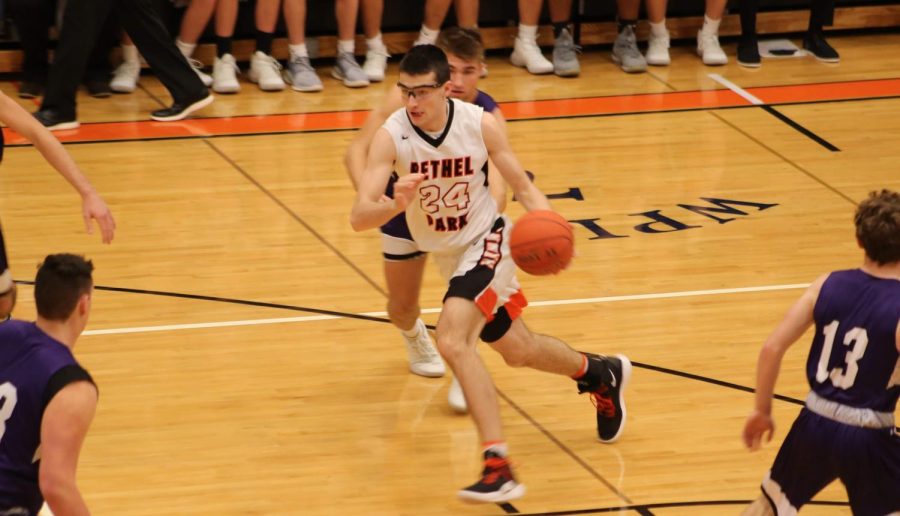 Tommy "Bones" DiRienzo is one of five seniors to be recognized at the Hawks game vs. the Panthers Friday night. It's Senior Night, Fan Appreciation Night, and Great Alumni Hall of Fame Night.

Friday night is not just another night. It is Senior Night, Fan Appreciation Night, Great Alumni Hall of Fame night (and revenge night).

The boys basketball team takes on Upper St. Clair in a revenge game from the last time they played them.

“Everybody knows what happened when we went to their place. We are all focused on what we need to do on Friday night,” senior guard Ryan Meis said.

At the end of each quarter, the Principal’s Advisory Council for Students (PACS) will be giving out a gift card for fan/student appreciation night.

At halftime, Bethel Park will be recognizing five alumni who have gone on to do extraordinary things in their careers.

Dr. Shantanu K. Gaur: Graduated in 2004 from BPHS. He was the valedictorian of his class and graduated from Harvard with a 4.0+ GPA where he also earned his Doctorate from Harvard Medical School. He co-founded Alluron Technologies and helped set up the “Weigh Loss 2.0” experiences to help with safer and more efficient ways of losing weight. He was featured on Bloomberg and CNBC and holds more than 30 patents.

Dr. Geoffrey Oakley: A part of the 1984 graduation class, he got his undergraduate degree at St. Bonaventure, as well as his dental degree from Pitt. After retiring as a commander in the navy for 20 years, he has been the dentist for BPSD for the past 21 years. He also is the assistant clinical professor at Pitt’s School of Dental Medicine. He helped coach hockey for BPHS and helped them win the 2000 Penguins cup and a state championship. Also, he helped coach baseball and lacrosse.

Jim Shooter: He graduated in the class of 1969. He wrote DC comics at 14 to buy a new engine for his dad’s car so he had a ride to work. He went on to help Marvel out, becoming the ninth editor-in-chief. Some successes when he was there include “The Amazing Spiderman,” “The Avengers,” “Fantastic Four,” “Uncanny X-Men,” and “Daredevil.” He also was a part of the creation of “Thor.” He is a shared founder of Valiant Comics and Broadway Comics.

Nicholas F. Smerigan, Jr.: He graduated in 1965. He works at Roadtown Enterprises, where he shined in the construction, design, management and operations of recording studios. He also did scoring, film and television sound stages. The folding acoustic door he helped innovate made two stages into one with the shooting area being doubled. He and his wife Gail helped design programs for training in high schools, technical schools, and colleges.

Wayne Trapp: He is a graduate of the Class of 1954. Before opening his own studios in Vermont and Ohio, he attended the Art Institute, Carnegie Mellon University, Arts Student League in New York, Pratt Institute and Ohio State University to study sculpture. Most of his work he created is from his home in the mountains of North Carolina. He loved taking new artists in and sharing and teaching them about his love for all things art and life.

Come out and support the Hawks this Friday night as the Hawks take on the Panthers.