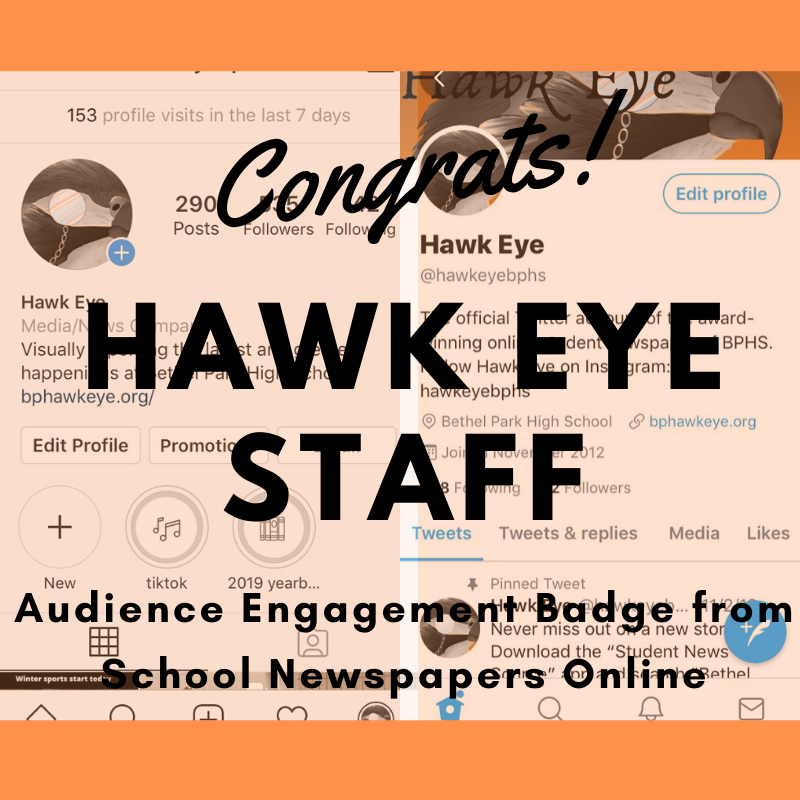 The Hawk Eye staff won the Audience Engagement Badge from School Newspapers Online for reaching a broad audience via their website and social media accounts.

Since 2011, the Hawk Eye news team has been working very hard to reach a broader audience and get more views; they have certainly achieved that goal. They were recently awarded the Audience Engagement Badge from School Newspapers Online.

“Earning the Audience Engagement Badge means so much to us. Without the help of our loving audience, our paper wouldn’t be the way it is today! It means so much to know that we have such a great amount of people loving our paper as much as we do,” said Editor-in-Chief Erin Dublin.

Video Editor and Deputy Social Media Editor Joey Bova said, “We have been working very hard for the past two years to win this badge. It’s unfortunate, though, that we can’t share this moment with those who graduated last year.”

The staff won the Audience Engagement Badge because their website got at least 5,000 pageviews from at least 1,000 unique visitors in a one-month period. In fact, throughout the month of October, the site got 6,468 page views and 2,239 new users.

Their posts that got the most views were “Name that tune Halloween Edition,” “Class of 2020 leaves their mark on Black Hawk football,” and “Mr. Knapp back in the coaching saddle.”

In addition to the website views, in order to win the Audience Engagement Badge, you must have two active social media accounts, and between the two accounts, you must have 1,000 followers. Both accounts must be updated daily over the course of four weeks.

“It represents all of the hard work we’ve been putting in these past two years especially, and it’s a small token of what we’ve been producing,” Sports Editor and Deputy Video Editor Ryan Meis said about winning the award.

In addition to the Audience Engagement Badge, School Newspapers Online offers other badges including Multimedia, Story Excellence, Coverage, and Site Excellence. They also offer Best of SNO badges for individual articles and videos. While the Hawk Eye staff relishes in the glory of winning the Audience Engagement Badge, they will continue to work towards earning more badges.