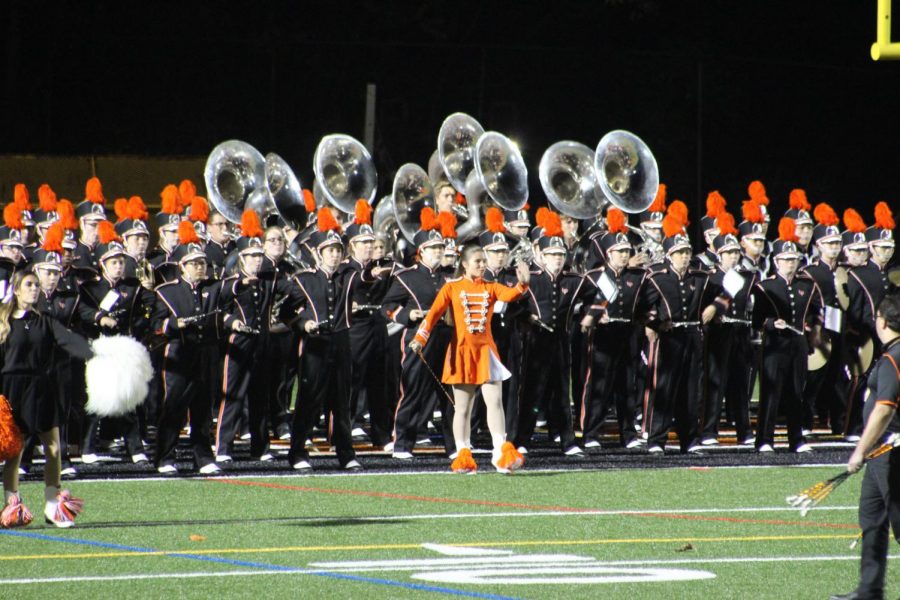 INSTRUMENTS RAISED, the Marching Band steps onto the field during halftime of a Hawks football game.

At 7 p.m. on Saturday, Oct. 6, Black Hawk Stadium will be home to a medley of sounds as Bethel Park hosts the annual Marching Band Festival.

Several bands have been invited to the Festival, including South Park, South Fayette, Laurel Highlands, and Steel Valley.

As the hosts, Bethel Park will start the show with a modified pregame routine. They will also close the show.  They will be performing “Distorted,” “Mambo, Officer Krupke,” and “John Williams Anthology.”

When asked about which band they were most excited to see perform, seniors Brayden Linz and Lauren Wandel, and junior Katie McClary all answered South Fayette’s Little Green Machine.

“The Little Green Machine’s whole band does a kick, and we love that,” said Lauren Wandel.

It will be a fun evening filled with music and talent, so come out and support the Bethel Park Marching Band.

Tickets are $6 if purchased in advance from any member of Marching Band or $8 at the door. The gates open at 6 p.m.