The new BPHS: a fresh start 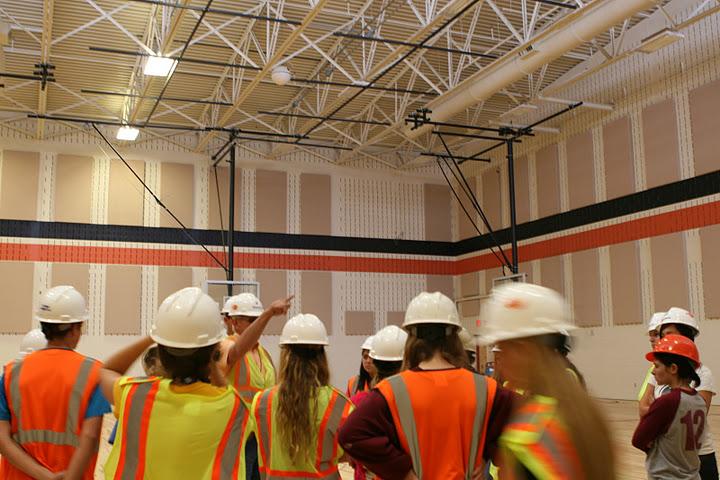 Back in October, I, along with students from SGA, PACs, and Yearbook, led by Dr. Jansante, was invited on a select student tour of the new Bethel Park High School.

Before the tour I tried psyching myself up as little as possible.  I expected this new building to be nothing more than a small, cramped, average, learning facility.

When I entered and took my first steps inside I was greeted with an unexpected and brilliant view.  In front of me on the ground was the beautiful Black Hawk emblem and ahead of that was a gigantic wall structured around massive windows with sun illuminating the entire room.

Stunned at how unbelievable everything was, I gained my bearings realizing that our group was already moving on.  From the Black Hawk emblem to our next destination was but a mere 30 steps, and yet those 30 steps changed everything.

We set foot in another set of doors and I was instantly dumbfounded.  The room we entered was easily 5 times larger than the main lobby of the High School.  The room was paved with sleek wooden floor boards, and had a massive 4 sided monitor hanging above everything.  We had entered the main gym, and had a great view of the entire room, because we were about 10 – 15 feet above everything on an octagonal walkway.

Here are some interesting facts about the new gym.  It can seat around 2,450 people.  It’s shaped like an octagon, but if it were just a normal square it could fit 3 professional sized basketball courts.  Another cool fact is that the score board has 4 projection screens that allow video or live events to be shown.

While talking to Dr. Jansante about the gymnasium, someone asked about the air conditioning.  Our principal was excited to talk about this one to us.  He explained that the way the the cooling system works is that there are 26 big containers.  During the day cold air is blown out, and the reason that they’re able to blow cold air out is because of these 26 containers.  At night everything is powered down, and the chillers start to make ice, causing the temperature in the containers to drop drastically.  When day arrives air is blown through the containers naturally making it cold.  For heating the school it’s the same thing except with boiled water.  The whole system is extremely green and ecofriendly

As we continued on the tour, the next area we entered was the auditorium.  We weren’t in here for long, and it was still under heavy construction, but I got a good enough look at it to see that it had much potential.   There were acoustic panels that are great for bouncing sound all over the room.  For all orchestra members there will be a built in pit so that a homemade one will not have to be constructed around musicians.  The projection booth is about 3 times bigger than the one in our school.  The only problem is that the auditorium is a tad bit smaller than the original, and can only fit 1,300 students.  However the professional set up of the room makes up for it completely.

Now on to one of my favorite parts of the tour, the courtyard and cafeteria.  We ventured back to the main lobby and descended down a wide set of stairs to where our food will soon be served.  There are 3 areas where you can eat, either  under the floor of the main lobby, directly where the stairs take you, which is a little more open, or the court yard.  All in all,  the lunch room seats about 700 to 800 at a time.  The courtyard is about the size of a football field and can seat around 100 students.  In the main cafeteria there are 4 different sections which will be used to serve different entrees.

These 3 things were the main focal points for me during our trip into the new high school; however, I spoke to Dr. Jansante later and he explained plenty of other interesting things about this building.

There is a new TV. Studio.  The TV. Studio has an adjacent editing room, with completely new editing software.  There will be 3 cameras for the use of students or faculty members.  The studio will also have a green screen, or so I’ve heard.

Some new things in the music department include larger rooms, such as the chorus room which will be 3 times larger than the one we have now, a tech room for kids who want to create songs, practice rooms for those who want to have individual practices, a larger band room, and brand new state of the art tech equipment.

All the classrooms have changed completely as well.  Instead of chalk boards, rooms will now use white boards.  Equipped above all of these white boards is smart projector.  What these ingenious devices do is turn the average white board into a touch screen.  These touch screens will be in each classroom, along with motion sensors that will automatically shut off the lights if there is no movement in the room.  This helps the school save electricity and also maintain an ecofriendly environment.

Many students are worried about not being able to go outdoors during the school day for a nice breath of fresh air like the campus offers us now.  There are no worries there, as the outdoor courtyard leads to many sections of the school.  If someone needs to get to class, but wants to head outside, then the courtyard is your solution.

The new BPHS will make students’ lives much easier, it will help the environment, and provide new technology for everyone.  All in all, I feel as though this new school will be a fresh start for the students of Bethel Park.