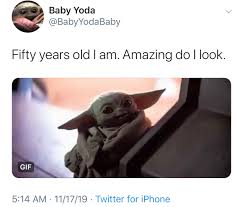 Baby Yoda is said to be Yoda’s son, who is fifty years old but looks like an infant. But the presence of Baby Yoda has the internet in an uproar. It doesn’t take long to make something into a viral meme, and he has taken over. People just can’t stop sharing pictures of this adorable little creature.

Some of the memes talk about how much they love him and how many people would die for him. But with more episodes of “The Mandalorian” coming out, the memes are just gonna keep coming.