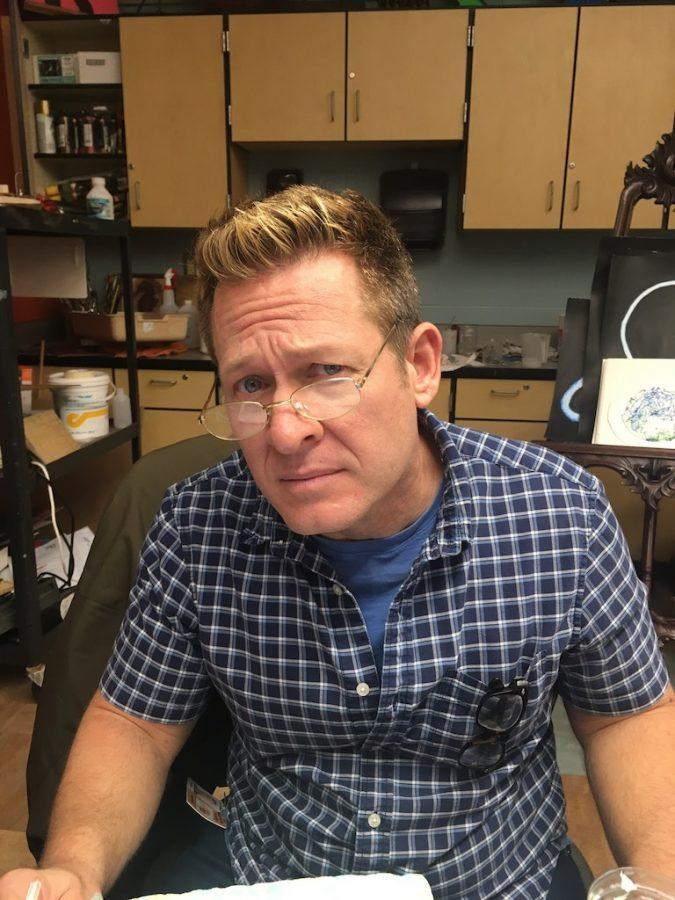 Kent Wallisch is the well-known, well-liked art teacher at BPHS. He blends in well with his staff and easily interacts with his students. He seems to be the perfect man, but nobody is perfect. I believe Kent Wallisch is not whom he seems and is rather an escaped night school student who stole the real Kent Wallisch’s identity. I sat down with Kent Wallisch to discuss this theory.

In the beginning of the interview, Kent was extremely quiet and did not answer any questions. After a discussion off the record, I was able to get Kent to speak on this issue on the record.

How old are you really?

“See, I don’t know how to answer any of these questions.”

HOW OLD ARE YOU?

Do we have any proof of that? Would you be willing to bring your birth certificate to school?

How did you get this job?

“I came in for Mrs. Palombo’s maternity leave.”

Or did you come in when you locked the real Mr. Wallisch in a closet?

Have you ever been in night school?

“No, I have never been in night School.”

Didn’t you used to teach in night School?

Would you consider yourself a liar?

Have you lied before?

You just did lie, so have you lied before?

“Maybe a few times in my life, I guess.”

Would you consider saying your name is Kent Wallisch a lie?

Do you have any evidence to back that up?

Would you bring those in?

“Yes, it’s possible I could bring them.”

Where is Kent Wallisch?

Where are you hiding him?

“The idea of Kent Wallisch is more than just a person. It’s bigger than that. The idea of like… hope everyone can take that.”

How long have you been saying you are Kent Wallisch?

Have the cops ever been close to catching you?

“I’ve never had cops after me. No. I’ve watched that movie Bourne. ”

Since you’ve watched Bourne, have you just been taking notes and playing out that movie in real life by using fake IDs and stealing identities? Did you kill Kent Wallisch?

“No. I have never killed anyone. But, I do like those movies. They are interesting. Changing the IDs and personalities. He’s pretty fast too.”

Would you say you’re close to being Jason Bourne?

“Yeah. Slightly. A little bit. Sometimes I cut my hair a little bit like that.”

Since you idolize this Jason Bourne character, this is just proving my case. So how long were you in night school before you stole Kent Wallisch’s identity?

“I don’t know how to answer that question.”

Hypothetically, if you were a night school student and you were to kidnap a teacher, where would you put him/her?

“I don’t know where the best place to store someone. My back room here. That’s possible.”

Do you feel threatened by this interview and do you feel that you are going to get caught?

“I am slightly threatened by this interview. It makes me nervous.”

At the end of the interview, I was convinced my theory was true. Since Kent was unable to answer some questions, it led me to believe he was truly an escaped night school student. Also, his fascination with Jason Bourne allowed me to believe he is capable of faking his identity and birth documents. Hopefully this interview will bring attention to the issue at hand.