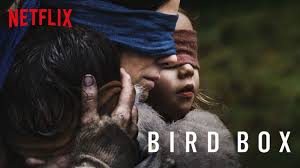 “Bird Box” is a horror thriller movie that came to Netflix on December 21, 2018. It is absolutely insane and it’s a movie that makes you think about what’s going on.

The movie is rated R as it has violence, bloody images, language and brief sexuality.

In the movie, Malorie, played by Sandra Bullock, is pregnant (and later gives birth) and has to protect her child and another child from the “beings.” Whatever those beings are, they tap into your deepest fear. The beings take control of people and make them commit suicide. The only way you can survive from the beings is if you keep your eyes covered.

So, throughout the entire movie, Malorie and others have to travel with their eyes covered to a safe place just to survive.

This movie is amazing. It has everything I like in a horror movie: psychological moments, jump scares, and slight gore.

It’s the best horror movie I’ve seen in a while. I highly recommend it if you like horror movies.