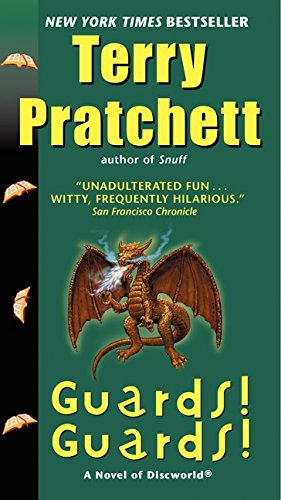 The wonders of fantasy books have gone far and wide in usage of creativity, world building, narrative, poetry, and many others. Me, being a fantasy sci-fi fanatic, look for stories that swipe imagination and scuttle off with it to do as it pleases.

The book “Guards! Guards!” by Terry Pratchett is a fantastic example of eclectic media poured into the cauldron and seasoned with just a hint of witty, satirical humor to spice up the end result.

“Guards! Guards!” is comic fantasy, taking place in the fictional world of the Discworld. The Discworld is flat, circular, balancing on the backs of four giant elephants, who in turn stand upon the shell of the star turtle, Great A’Tuin.

The story takes place in the city of Ankh-Morpork, run by the Patrician, Lord Vetinari. In this city, crime is legal, but organized, just the way Vetinari likes it.

Sam Vimes, the main character, is appointed to the Watch in a legal system that deems him useless. Other members of the Watch include Nobby Nobs, Sergeant Colon, and the newest member, Carrot.

The book’s theme exemplifies the desire for power and what it could lead to. A secret society summoning a dragon, crowning it and hailing it is all an example of what not to do when ruling a city.

It is overall a wonderful tale by one of the most masterful satirists out there.