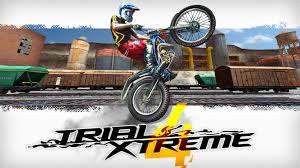 It is getting toward the end of the school year, which means a whole lot more time at school. This means more time on your phone, whether it was made by Apple or Android. Well, here is an interesting game that might help you get through the summer.

This time, I am doing a review on Trial Xtreme 4. Like the countless number of other games I have reviewed, I will grade the game on its overall play, achievements, price, movement and graphics, and addiction rating. Then, I will give an overall numerical grade of the game.

1. Overall Play: In Trial Xtreme 4, the main purpose is to race a motorcycle on a course and try to finish it in the least time possible. Finishing a level gives you coins in order to buy things. With these coins, you can upgrade your bike, buy a new one, unlock a level, or race a random competitor in the duel competition, where you can double your money or lose it all. You can also race in tournaments to win coins.

However, there are many problems. One, if you play offline and complete a certain number of levels, you have to do them again once you are offline, since they do not save. In addition, when the bike is upgraded, only acceleration is made better, not braking or steering. Furthermore, in duel races, you will always lose, no matter how good your bike is. Thus, even though overall play of the game might seem good at first, it gets worse over time.

3. Price: Compared to other games, this game is awful in the price category. You have to pay for almost anything: no advertisements, new bikes, and new levels. In addition, this could cost up to $199.99. This is outrageous for a game, since you could use this money for a real bike, no matter how bad it runs. In addition, most games only have prices as high as $99.99. Due to that, this game fails miserably in this category.

4. Movement and Graphics: Movements is pretty bad. The motorcycle does not move as fast as it should, especially in dual play. In addition, upgrades for acceleration do not work, so the motorcycle mostly only goes one constant speed. Furthermore, the motorcycles does not tip left or right when you push the button. It either goes too slow, or it is delayed.

Graphics are a little better, but not much. The game sometimes depicts a motorcycle that is braking and leaving skid marks when it had not even slowed down. In addition, the game is often too pixelated, and the buildings do not look like buildings. Thus, the game’s graphics are not that good either.

Overall Grade: 68/100. Honestly, this is one of the worst games I have played. With sucky graphics, bad game play, and outrageous prices, you should not waste your time playing unless you really like motorcycles (and bad graphics, and high prices, and….).