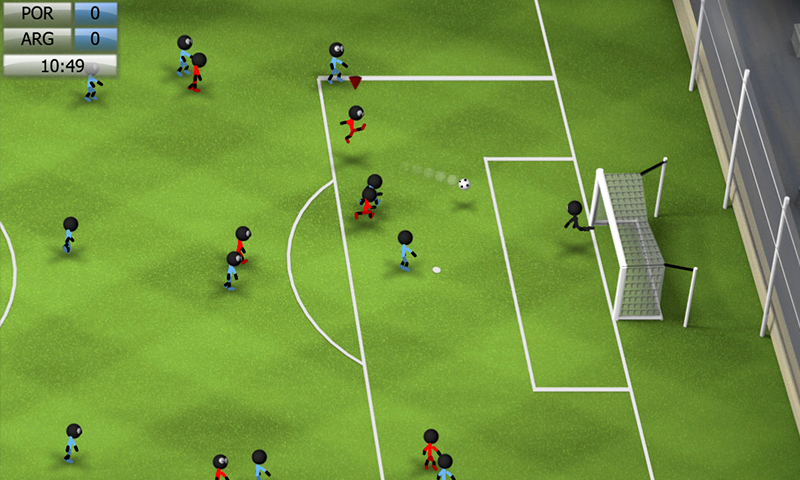 He gets around the defense. He shoots, and he scores! Goal, United States!

This review is on Stickman Soccer 2014. Like every other review, I will rate this game on its overall play, achievements, price, movement and graphics, and addiction rating. I will give a letter grade for each category and a total numerical grade for the game.

The goal is clear: win soccer games. There are many different modes in this game. After you choose a team. you can play a quick game, or enter a tournament or season. Tournaments are like the World Cup, while seasons are like the MLS. And, if you do not feel like playing a full game, you can do go into the penalty kick mode.

However, there are a few troubles with the game overall. One, the game sometimes glitches, so you can only pass. Next, the videos occasionally do not function properly. Furthermore, this game lacks fouls, like offsides. Finally, in certain tournaments, the hardest level may seem very easy, even if the team’s offense and defense is under a rating of 50. Otherwise, the game is good.

2. Achievements: There are no achievements in this game. You either have to watch a certain number of videos to unlock a tournament or do well in the previous tournament. In addition, there is only a leaderboard, and no goals or achievements to pass. Thus, this game fails in that category.

3. Price: This game is relatively cheap. It is free to download. Also, you only have to watch videos to unlock teams or tournaments. In addition, it only costs $2.36 to become a ‘pro’ and get rid of the ads. Thus, the game is very cheap to play.

4. Graphics and Movement: Movement is alright. I say this because sometimes, the player could move slower than usual. In addition, the players sometimes move in ways that a regular person could not. However, other than that, movement is good.

Graphics are also good. The game accurately depicts a soccer field, its players, and the score. In addition, the game does not freeze out of the blue.

This game is a good game if you are a soccer fan. There are two problems though: it does not accurately depict the sport in some aspects; and, it lacks achievements. If these two problems are fixed, this game is deserving of an ‘A’.